A brand new Tesla Model S Plaid has reportedly burst into flames in a suburb of Philadelphia in Pennsylvania. Firefighters reached the spot to control the fire. 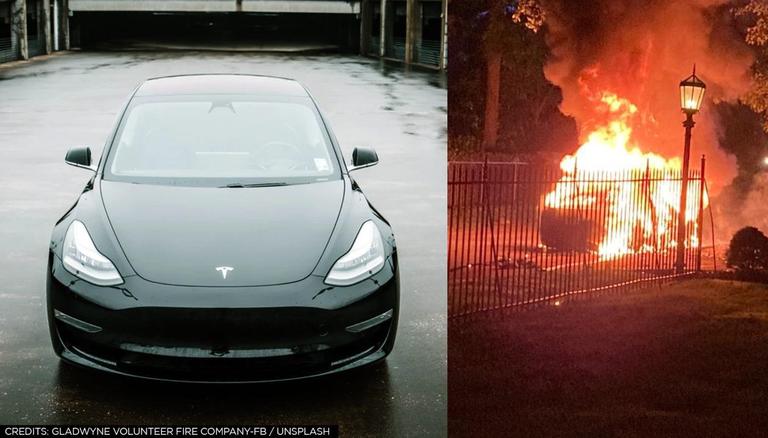 
A brand new Tesla Model S Plaid has reportedly burst into flames in a suburb of Philadelphia in Pennsylvania on June 29. The driver managed to rescue himself before the car was entirely engulfed in fire. The Merion Fire Company of Ardmore and Gladwyne Fire Companies were dispatched to control the fire.

Police had arrived at the spot first and confirmed a fully involved vehicle on fire, said the Gladwyne fire department in a Facebook post. As Tesla is an electric vehicle with the entire floor plan full of over 7,000 batteries that energize the vehicle, the firefighters took special precautions to extinguish the fire. Firefighters said that copious amounts of water were poured on the vehicle for over 2 hours in order to extinguish the fire and render the scene safe. The Gladwyne fire department reported that no injuries occurred. The vehicle was towed to the Lower Merion Township Public Works Koegel complex followed by an Engine so it could be safely stored in an open area, in case of possible reignition. In the press release, Gladwyne Fire Companies said that the cause of the fire remains unknown and the investigation remains open.

Charles McGarvey, chief fire officer for the Lower Merion Township Fire Department in Pennsylvania told CNBC that a new Tesla Model S Plaid caught fire on June 29, while the driver was at the wheel. The car owner’s lawyers told CNBC that the driver saw the smoke coming out from the back of his 2021 Model S Plaid car. He reportedly tried to open the doors but the locks seemed to malfunction. After the driver left the car, the car began to move on its own and fire engulfed it. Tesla company had recently begun delivering its Model S Plaid on June 11.

READ | Tesla 'recalls' over 285,000 vehicles in China over issues with its cruise control systems

Recently, Elon Musk’s Tesla is "recalling" over 285,000 vehicles in China including most of the cars that were made locally over a safety risk with their cruise control. As per Wall Street Journal, China’s State Administration for Market Regulation on June 26 said that the ‘recall’ includes 249,855 Model 3 and Model Y vehicles that were made in Tesla’s Gigafactory in Shanghai and 35,655 Model 3 vehicles that were imported. All of these vehicles were reportedly produced locally between December 2019 and June 2021.