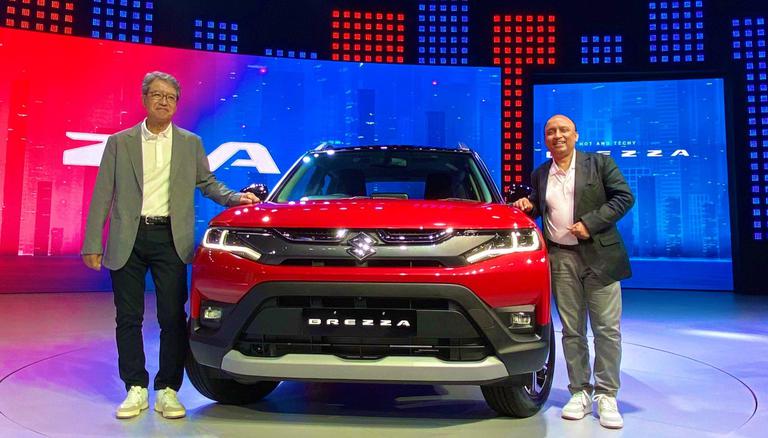 
The country's largest carmaker Maruti Suzuki India on Thursday launched the all-new version of its compact SUV Brezza, with a price starting from Rs 7.99 lakh (ex-showroom) as it seeks to strengthen its presence in the SUV segment to reinforce its leadership position.

The second-generation Brezza, which competes with the likes of Tata Nexon, Hyundai Venue and Kia Sonet, will be available in manual and automatic transmission options, priced between Rs 7.99 lakh and Rs 13.96 lakh.

Speaking at the launch, Maruti Suzuki India Managing Director and CEO Hisashi Takeuchi said the all-new Brezza is the company's sixth launch in the last eight months and "reflects our confidence in the Indian market".

As part of the company's vision of providing 'Joy of mobility' to as many people as possible, the automaker will strengthen its "presence across segments, with special focus on SUV portfolio", he added.

Also, it will introduce products that are high on design, technology and features and bring products, which "offer indulgence, comfort and convenience that reflect the aspirations of New India".

"The all-new Brezza is an important step in this direction. This model is the first offering in our upcoming vibrant SUV portfolio," Takeuchi noted.

READ | Maruti Suzuki Brezza 2022 to launch today: Here's everything we know about the SUV so far

Stressing that the Brezza has a strong legacy, he said, "It was our first model to be conceived, designed, and developed exclusively for India".

Maruti Suzuki had made its entry into the compact SUV segment in March 2016 with Brezza and the company has sold over 7.5 lakh units in six years since it was launched.

"The all-new Brezza ushers a new era of next-generation SUVs from Maruti Suzuki," he said, adding that driven by customers' expectations, the company has re-designed the model while "tastefully retaining its DNA".

The second-generation Brezza is powered by the company's next-gen K-series 1.5 litre petrol engine with smart hybrid technology and delivers fuel efficiency of up to 20.15 km per litre.

The model comes with both manual and six-speed automatic transmission, electric sunroof, head-up display, digital 360 camera, and 40 connected features, among others.

It also comes with over 20 safety features, including six airbags and hill-hold assist.

The new Brezza comes at a time when Maruti Suzuki is facing tough competition from South Korean car makers Hyundai and Kia, with their Venue and Sonet, respectively, in the segment.

With shrinking sales of small cars, Maruti Suzuki's overall market share in the Indian passenger vehicles market had come down to 43.4 per cent in FY22 from nearly 50 per cent earlier.

The company had missed out in the fast-growing SUV segment and the launch of the new Brezza is aimed at growing its share in the SUV segment.

With shrinking sales of small cars, Maruti Suzuki's overall market share in the Indian passenger vehicles market had come down to 43.4 per cent in FY22 from nearly 50 per cent earlier.

The company had missed out in the fast-growing SUV segment and the launch of the new Brezza is aimed at growing its share in the category.

Takeuchi said the overall SUV segment now accounts for 40 per cent of the Indian passenger vehicles market and Maruti Suzuki's presence in the segment is not good enough and has to offer more 'right products' to achieve its goals.

"We are looking to fix it up by introducing new models," he noted.

He termed the upcoming Bharat NCAP regulations as a good move, which would give customers a choice to make informed decisions.

MSI Senior Executive Director (Marketing & Sales) Shashank Srivastava said that the company has a market share of around 67 per cent in the non-SUV segment and that it is working to improve its share in the SUV vertical as well.

Elaborating on the scenario, he noted that while there were around 47 SUV models in the market, MSI had only two products in the robustly growing segment.

Srivastava stated that the new Brezza has received 45,000 bookings already, and the company has a capacity to produce 10,000 units a month, thereby resulting in a waiting period for the model.

He said while the semiconductor shortage situation that has impacted production has improved, the company still has "no visibility for a longer frame".