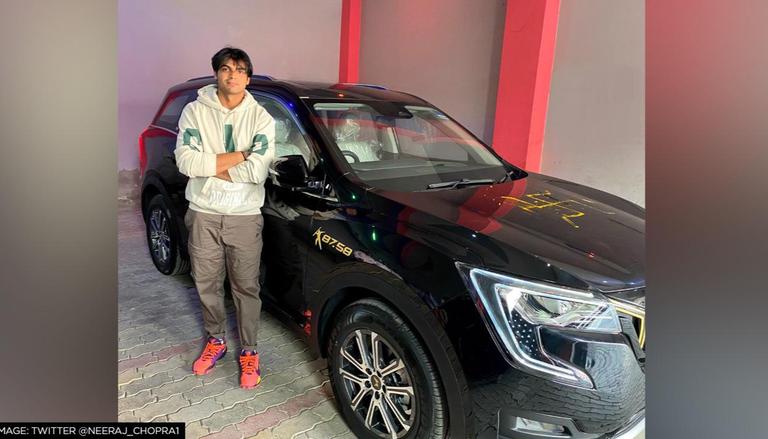 Mahindra on Saturday delivered the customised car SUV to the Olympic gold medal winner. The athlete took to his official Twitter handle to share an image of him posing with the new set of wheels. The car’s customisation sees a gold javelin thrower etched on the side of the bonnet along with the number ‘87.58’ written on the side. The number marks the historic length that took Chopra to land his Olympic medal.

Thank you @anandmahindra ji for the new set of wheels with some very special customisation! I'm looking forward to taking the car out for a spin very soon. 🙂 pic.twitter.com/doNwgOPogp

Sharing an image with his new car, Neeraj Chopra tweeted, “Thank you @anandmahindra ji for the new set of wheels with some very special customisation! I'm looking forward to taking the car out for a spin very soon.” Anand Mahindra retweeted the same and said that the athlete had made the country proud and they tried to pay back. “You made the country proud @Neeraj_chopra1. We hope the XUV, our Chariot of Champions, will make you proud[sic],” the company chairman tweeted.

Neeraj Chopra made history at the Tokyo Olympics as he ended the country's 100-year-long wait of winning a medal in athletics. Moreover, Neeraj also became only the second individual Indian sportsperson to win a gold medal for India at an Olympics event. The other Indian to win a gold at the mega event was Abhinav Bindra, who won the shooting event at the 2008 Beijing Olympics.

'Will be an honour to gift XUV700 to 'Golden Athlete' Neeraj Chopra': Anand Mahindra

Anand Mahindra in August pledged to gift the SUV to Neeraj Chopra while responding to a 'follower' on Twitter. The individual asked him to gift the star athlete, to which Anand Mahindra replied, "Yes indeed. It will be my personal privilege & honour to gift our Golden Athlete an XUV 7OO[sic]." Tagging M&M Ltd Executive Director Rajesh Jejurikar and M&M Ltd CEO Automotive Division Veejay Nakra, Mahindra asked them to "keep one ready for him."