As the Galwan faceoff has led to an anti-China sentiment, giving way to 'Boycott China' call in India, the corporate sector has also joined in the effort

As the Galwan valley violent faceoff has led to an anti-china sentiment giving way to 'Boycott Chinese products' in India, the corporate sector has also joined in the bandwagon, with JSW Group making an announcement to reduce $400 million imports from China to make it to zero in two years.

Taking note of the decision, Engineer turned education reformer Sonam Wangchuk has lauded the conglomerate's action in line to the nationwide sentiment. Sonam Wangchuk had advocated that Indians should start to boycott Made in China goods, arguing that the Chinese will feel the pinch harder on "their wallets" than on the border "with bullets". 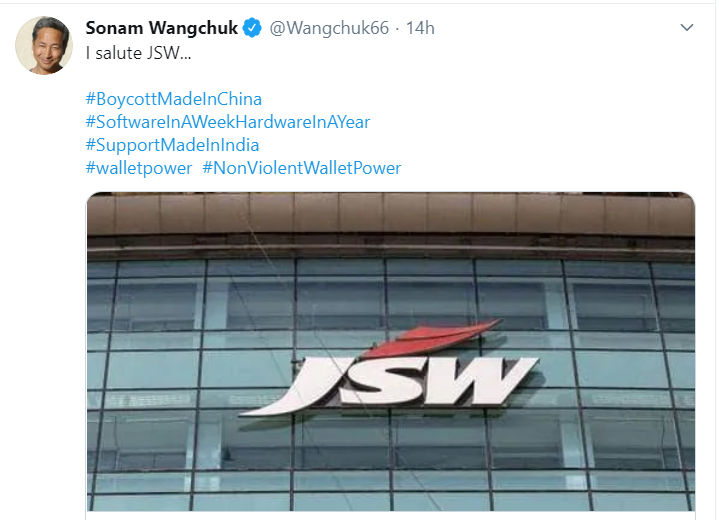 Last month, while speaking with Republic TV, Sonam Wangchuk had earlier iterated his demand for people to drop the use of Chinese software "within a week" like video sharing platform TikTok. He said Indians have the freedom to choose what they spend on with their wallet and if a country doesn't treat India fairly then they should use boycotts as "personal economic sanctions".

He went on to suggest that Indians need not depend on cheap Chinese products and look for domestic alternatives. By giving an example of a pair of shoes he said, "these lockdowns have shown us that we can be happy with much less than what we used to have. So, rather than having five cheap Chinese shoes, we can choose to have one, very well handcrafted Indian-made pair of shoes. We have to make choices and those have to make impact on how we stand up to such countries (China)."

After 20 soldiers were martyred at the Galwan valley faceoff alone the LAC, several groups across the nation protested against the sale of Chinese goods. Moreover, the Dedicated Freight Corridor Corporation of India (DFCCIL)- a PSU under the aegis of the Ministry of Railways has terminated a Chinese company’s contract. Centre too has taken several steps to decrease Chinese imports and to make India more self-reliant. Apart from these, recently several Indian companies with Chinese funding have faced the ire of the public as 'ban Chinese goods' sentiment grows stronger. Traders' union CAIT has also decided to stop Chinese imports and called for a boycott of Chinese products causing a loss to the economy of the hostile communist neighbour to the tune of Rs 1 lakh crore by December 2021. Indian Government also banned 59 Chinese apps to secure the illegal data passage.

Besides, there has been significant anti-China sentiment worldwide, for a number of reasons, starting with the spread of the Coronavirus from its territories, China's aggressive expansionism, both economically and territorially, has also contributed to this, not only the violent LAC flashpoint, but also the disputes in South China sea with almost all the neighbours sharing the water body.