'Hats Off To The Human Imagination', Harsh Goenka Shares Unique Way Of Using An Old Tyre

This use of a tyre I could never have thought of'', Harsh Goenka shared an innovative video of a construction worker using an old tyre in a creative manner. 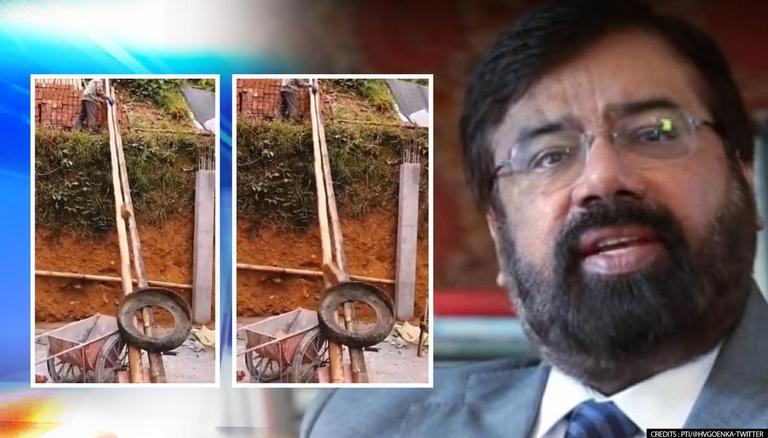 
Indian industrialist Harsh Goenka, who is known for sharing motivational posts on Twitter every now and then, recently shared an innovative video that has captured the attention of the netizens. Taking to Twitter, the business tycoon shared the video of labour using an old tyre in a creative manner. He said, "This use of a tyre I could never have thought of. Hats off to the human imagination!". The video shared on June 13, has managed to garner 46.1 thousand views with 259 Retweets and 2,900 likes.

This use of a tyre I could never have thought of. Hats off to the human imagination !pic.twitter.com/oaSAY7ADhS

The video post shows a construction worker using two bamboo poles sliding down the bricks along a slanted surface.  At end of the bamboo poles, the worker has placed an old tyre and kept a cart to collect the bricks. As the bricks slid to the other end it gets collides with the tyre and land inside the car which absolutely makes the worker use it easier. This highly efficient idea saves labour's time, manpower and energy.

After the Business tycoon shared the video, Netizens flooded the comment section of the post with praises and innovative ideas. Some called it 'Jugaad at its best' and some shared ideas about how old tyres can be used.

Necessity is the mother of invention.

Jugaad at its best 👍

A CEAT serves even in Afterlife. https://t.co/PMH7RKJPY7

Out of box imagination was key to survive in extreme conditions of the earth by humans in past !!

Sir how abt a #Tyre Gardern.🙏

This is in #kenya

We all know that #climatechange is for real.

How it is done :
Paint the tyre for aesthetic use
cut a polythene sheet &
put at the bottom of tyre#EnvironmentDay #conservation #plants pic.twitter.com/jDlgg9Z4yG

This can happen only in India