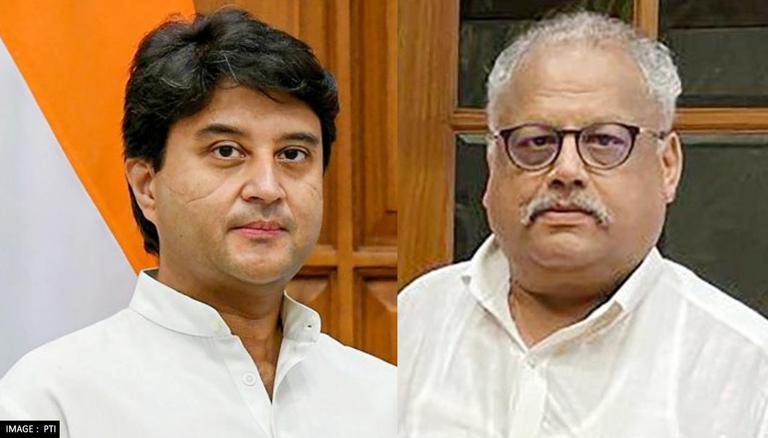 Remembering Rakesh Jhunjhunwala, Jyotiraditya Scindia spoke to ANI and said, "He was a symbol of India’s entrepreneurial spirit. From what he had achieved, many thousands and lakhs of youths will get inspiration. Recently we inaugurated Akasa airlines on August 7, I had no idea what difficult situation he was going through. I pay my condolences to his family."

Taking to his Twitter, Scindia also said, "Rakesh Jhunjhunwala Ji was not only an astute businessman but also passionately invested in India’s growth story." Adding further he said, "He will be remembered for giving India its new airline Akasa Air after more than a decade."

Sh Rakesh Jhunjhunwala Ji was not only an astute businessman, but also passionately invested in India’s growth story. He will be remembered for giving India its new airline @AkasaAir after more than a decade. My deepest condolences to his family & loved ones.

Notably, on August 7, Civil Aviation Minister Jyotiraditya Scindia virtually flagged off Jhunjhunwala-backed Akasa Air's first commercial flight that departed from Mumbai to Ahmedabad. After the commencement of the new airlines, Scindia said, "Akasa Air's arrival in India is a new dawn for the airlines in the country."

The newly launched Akasa Air took off on August 7, from Chhatrapati Shivaji Maharaj International Airport in Mumbai after the airline got its air operator certificate from the Directorate General of Civil Aviation (DGCA) on July 7.

Thanking the Aviation Ministery, Jhujhunwala, who was present at the Mumbai airport during the take-off of Akasa's first flight, in his speech said, "I must thank you (Scindia) because people say that India has a very bad bureaucracy but, the cooperation that the Ministry of Civil Aviation has given us, it is unbelievable."

"Nowhere in the world has an airline been conceived and born in 12 months. Normally a child is born in nine months, we took 12 months. It would not have been possible without the cooperation of the Ministry of Civil Aviation," he was quoted by news agency PTI.

READ | Rakesh Jhunjhunwala no more: Tributes pour in after sudden demise at 62; 'End of an era'

Notably, Jhunjhunwala famously referred to as the "Big Bull of Dalal street" and "King of Bull Market" died at the age of 62 on Sunday morning. As per media reports, Jhunjhunwala had been in a wheelchair for a long time and suffered from multiple health issues. He was brought to Mumbai's Breach Candy hospital at 6:45 am, where the doctors declared him dead.