Vijay Mallya is accused in a bank loan default matter of over Rs 9,000 crore involving his defunct Kingfisher Airlines. He's been living in the UK since 2016 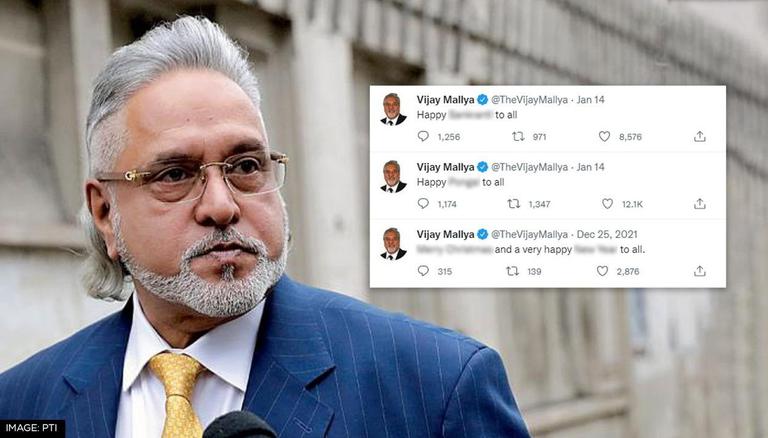 
Fugitive Indian businessman Vijay Mallya who has been residing in the United Kingdom ever since he fled India whilst facing allegations of wilful default and bank fraud made another of his increasingly sporadic appearances on microblogging site Twitter on Wednesday. Taking to Twitter, Mallya extended Ganesh Mahotsav greetings to the people. However, the tweet didn't go well with the social media users who observed mockingly that he 'only comes online during bank holidays'.

Vijay Mallya tweeted, "Happy Ganesh Chaturthi to all" on August 31, an innocuous tweet on the festive occasion.

Happy Ganesh Chaturthi to all

A netizen replied to Vijay Mallya's tweet and said, "This guy only tweets when banks are closed". This caught the attention of the business tycoon Harsh Goenka. Sharing the screenshot of the tweet, the business Tycoon captioned it 'Twitter is Ruthless". Goenka's tweet garnered 120 retweets and 3,067 likes

Notably, Mallya's Twitter timeline does appear to reveal that the fugitive businessman increasingly posts only during Indian festivals which also generally correspond with bank holidays. 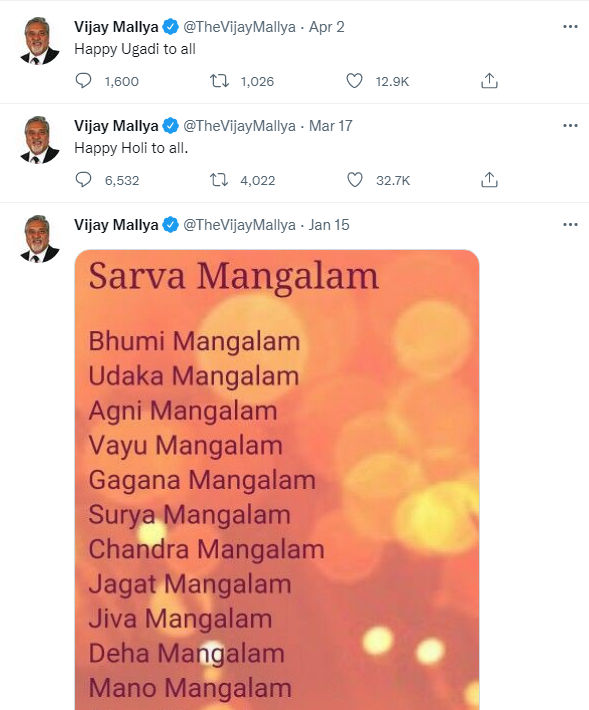 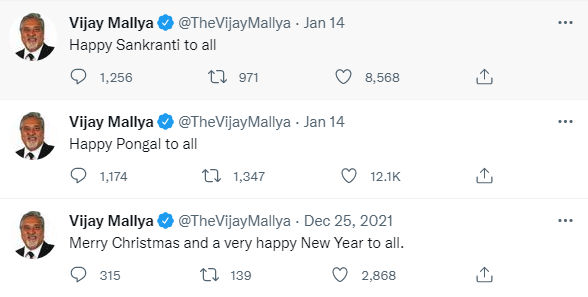 Netizens flooded the comment section of Vijay Mallya's post with mixed responses and memes. While some users asked him to return to the country, some demanded he return the borrowed money from the banks.

This is not accepted.

Nobody is giving me any loan, even though I have no resources to flee the country 😢🙄..

Mallya is accused in a bank loan default matter of over Rs 9,000 crore involving his defunct Kingfisher Airlines. The apex court had in 2020 dismissed Mallya’s plea seeking review of the May 2017 verdict which had held him guilty of contempt for transferring USD 40 million to his children in violation of court orders. Mallya has been living in the United Kingdom since March 2016. He is on bail on an extradition warrant executed by Scotland Yard on April 18, 2017.

The apex court had noted that as per an office memorandum, under the signature of the deputy secretary (extradition) of the Ministry of External Affairs (MEA), the proceedings for extradition have attained finality and Mallya has “exhausted all avenues for appeal” in the UK