Bitcoin Hits Record High As It Passes $60,000 For The First Time Since Inception

In a new high, Bitcoin briefly rose above $60,000 for the first time on March 13, as the world's most popular virtual currency continued its record-breaking run

In a new high, Bitcoin briefly rose above $60,000 for the first time on March 13, as the world's most popular virtual currency continued its record-breaking run. As per the CoinMarketCa, which tracks cryptocurrency prices, Bitcoin hit an all-time high of $60,322.60 on Saturday. However, after a brief stint above the mark, it dropped back to below the $60,000 mark to $59,915.50.

As per the 24-hour report, the cryptocurrency hit the minimum at $55,845.47 with a net charge of $3,839.34. At its all-time high price, the supply of Bitcoin soared to 18.65 million. Meanwhile, its shares traded at 57,356.473 before the previous close. The cryptocurrency has been steadily making a high, indirectly influencing one of its biggest buyer-Elon Musk’s fortune. 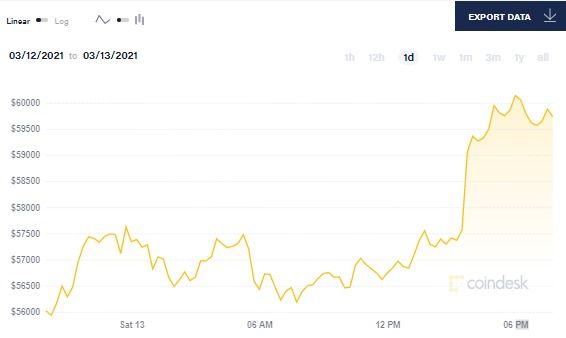 This comes a few days after a news fuelled speculation that all other big companies may soon add bitcoin or other cryptocurrencies to their balance sheets. The cryptocurrency space is seemingly an ever-growing market, and companies like Square Inc. and PayPal Holdings Inc. have already validated the exchange model. Nevertheless, with Apple Wallet, the iPhone seller will immediately lead the market with its potential.

What is a bitcoin?

Bitcoin is a cryptocurrency, which is also known as a digital currency and is traded entirely on the web. Bitcoin was invented in 2009 by an unknown person or persons and has no single administration to control it, unlike physical currencies, which are controlled by central banks all over the world. Bitcoin has become hugely popular among the masses in the last couple of years, before which it was only known by a select group of people.  At present, 1 Bitcoin is valued at 43,55,547.13 Rupee in India.