Adhesive company Fevicol has created a creative advertisement campaign on the Ronaldo-Coca Cola controversy and people can’t stop raving about it. 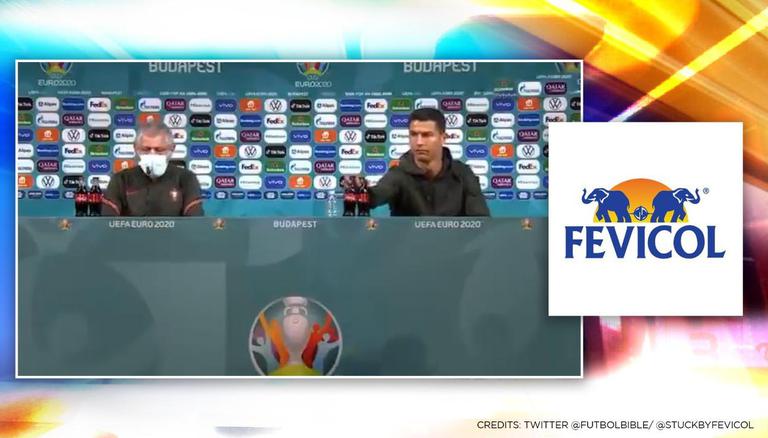 
Ace Football player Cristiano Ronaldo recently grabbed headlines at his press conference when he pushed aside two bottles of Coke placed on the table before holding up a bottle of water. Now, adhesive company Fevicol has created an advertisement campaign on the Ronaldo-Coca Cola controversy.

The creative campaign has caught the attention of netizens who reacted to the ad campaign in the comments section. The text on the creative ad reads, "Na bottle hategi, na valuation ghatega" that roughly translates to "Neither the bottles will move, nor the valuation will decrease" reiterating its promise of unmatched bonding.  The picture shows the empty chair and two bottles of fevicol that are placed on the table.

The post of Fevicol has garnered over 13K likes and several reactions. Netizens, impressed by the interesting ad, took to the comments section to praise the company. One user commented, "pidilite has been creative in advertising. No different this time too" (sic). Another user commented, "Awsome, Phenomenal Brand and Product, Such an agile creative desk for the Brand , such a bonding between the agency and the client...I take pride in saying I am a shareholder of Pidilite Industries Ltd" (sic). Another individual wrote, "Kudos to the ad agency! Fevicol ads have been consistently brilliant from more than 2 decades" (sic).

This time fevicol nailed it

Fevicol ads are my favorite since childhood. Their advertising team is very creative. 🙂

Kudos to the ad agency! Fevicol ads have been consistently brilliant from more than 2 decades ❤️

With #Pidilite's stock at life highs, adding insult to injury (those who went bearish in 2018 correction and been vocal ever since....) as far as the great Indian contrarians go. Nice advert 🤟

I think... it talks about the Coke bottles.

Football icon Cristiano Ronaldo has caught the limelight for his off-field actions ahead of Portugal's Euro 2020 opener against Hungary with "Cristiano Ronaldo Coca Cola video" doing rounds across social media. Ronaldo looked slightly uncomfortable with the Coke bottles on the table and swiftly picked them up and moved them away before lifting a water bottle. Multiple reports claimed that Ronaldo's disapproval of the drink resulted in a $4 billion fall in the company's stock value.

Cristiano Ronaldo was angry because they put Coca Cola in front of him at the Portugal press conference, instead of water! 😂

He moved them and said "Drink water" 😆pic.twitter.com/U1aJg9PcXq