For over a week patient care services were disrupted as resident doctors are on strike. They may opt for mass resignation, if demands are not met. 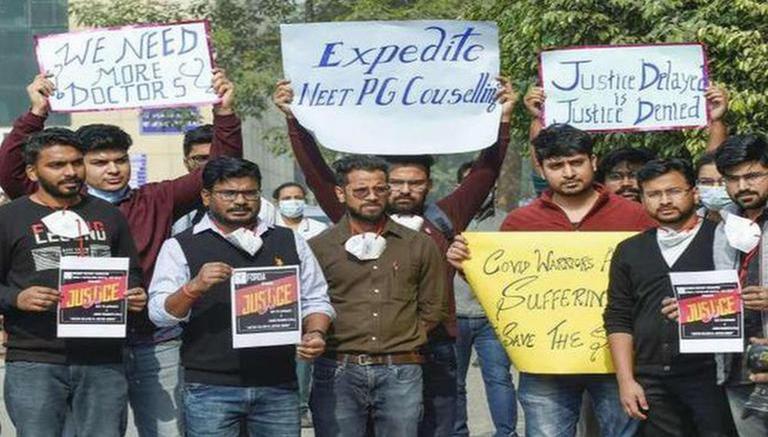 
NEET PG Counselling Delay: Doctors are protesting against the delayed NEET-PG counselling. In a recent move, resident doctors who have been protesting have threatened for mass resignation. The Federation Of Resident Doctors Association of India (FORDA) stated in a release that they were forced to consider this step because the Union Health Ministry has not taken any concrete steps to expedite NEET-PG counselling.

Meanwhile, in a massive show of solidarity, resident doctors also lit 'diyas' to register their protest. The Federation of Resident Doctors' Association (FORDA) has been spearheading the protest for the last several days. Recently, doctors from five states have also joined the National Capital's unwavering protest against delayed NEET PG counselling. National Capital doctors are being supported by doctors from Rajasthan, Uttar Pradesh, Punjab, Haryana and Madhya Pradesh. The doctors who are protesting have also demanded that the academic fee be restructured, and stipends be paid on time.

The doctors protesting are alleging that the government had made a false promise. They cited an "acute shortage" of resident doctors across India. They are citing the fact that the NEET-PG 2021 batch's counselling has already been postponed by eight months. Following the health ministry's commitment to accelerate court hearings and, as a result, fast-track the counselling process, resident doctors announced on December 9 that the agitation organised by FORDA will be suspended for a week.

On December 17, Akash Yadav, vice-president of the Resident Doctors Association of the Delhi government-run MAMC, reported that the hospital's resident doctors had begun their strike from Friday morning, boycotting all regular and emergency services, hampering patient care. MAMC has three affiliated hospitals: Lok Nayak Jai Prakash Narayan Hospital, GB Pant Hospital, and Guru Nanak Eye Centre. The LNJP is the city's largest government-run facility and the centre of the city's battle against the COVID-19 outbreak.