Lalu Yadav Pens Open Letter Ultimatum To Bihar CM Nitish Kumar, Says "now You Either Fire Your Arrow At The Muddy Lotus Or Hide - Your Choice"

Lashing out at JD(U) chief and Bihar Chief Minister Nitish Kumar, jailed RJD Chief Lalu Prasad Yadav, on Monday, has written an open letter to him on Facebook, highlighting the symbolism of the 'lantern' (RJD 's symbol) and its usefulness as a medium to achieve progress, indiscrimination, peace and love.

Lashing out at JD(U) chief and Bihar Chief Minister Nitish Kumar, jailed RJD Chief Lalu Prasad Yadav, on Monday, has written an open letter to him on Facebook, highlighting the symbolism of the 'lantern' (RJD 's symbol) and its usefulness as a medium to achieve progress, indiscrimination, peace and love. He also pointed out how the 'arrow' is a representation of violence, subtly hinting at all the crimes in the state.

He starts the letter saying:

"Listen, little brother Nitish, It looks like you are hating the light a lot these days, speaking about Lalu's low lantern constantly. Do you not know that lantern is the option going towards the light? It is the symbol of love and brotherhood, the way to remove darkness from poor people's lives. Using the lantern we(RJD) have driven away discrimination, hate, harassment, and injustice. Your party symbol is violence supporting symbol," reads the post.

He elaborates on how to achieve the eradication of unemployment hate, injustice, and discrimination, one must compromise and work in coordination like a 'diya and baati'. He also slammed his alliance with the BJP calling them Manuvian forces while slamming Kumar for taking shortcuts and opportunistic compromises.

"Public needs the lantern in all situations. Light is spread by lantern, bulbs, and lamps also. Using the bulb you cannot eradicate unemployment, harassment, hate, injustice, and discrimination hence you have to light the 'diya' with an open and loving heart and be the wick to the lamp for spreading peace. Bypassing a compromise, you will have to keep burning as you are entangled with casteist and Manuvian forces. What do you know of these intellectual and principled values! Taking shortcuts in fear and making opportunistic compromises is your ancient habit," said Yadav in his post.

This was in reference to their failed Mahagathbandhan (JD(U)-RJD-Congress) alliance post the Modi-wave in 2017, when Nitish Kumar resigned as Bihar Chief Minister and joined forces with BJP to form an NDA government in the state after Tejashwi Yadav allegedly refused to resign from his post as Deputy Chief Minister when cases of corruption were registered against Yadav, his elder brother Tej Pratap and father Lalu Yadav.

He ended the post saying that in the Kumar could or could not use his 'arrow' to backstab the 'lotus' (BJP) as he did to the 11 crore people of Bihar.

"Why are chanting 'arrow' in the age of missile? Arrow will be seen in museums only. The lantern will be seen shining everywhere and brighter because 11 crore poor people have been backstabbed by your arrows. Now you can fire or hide your arrow in the muddy lotus, your choice," concludes Yadav with a message to voters warning them of the 'arrow' piercing Bihar. 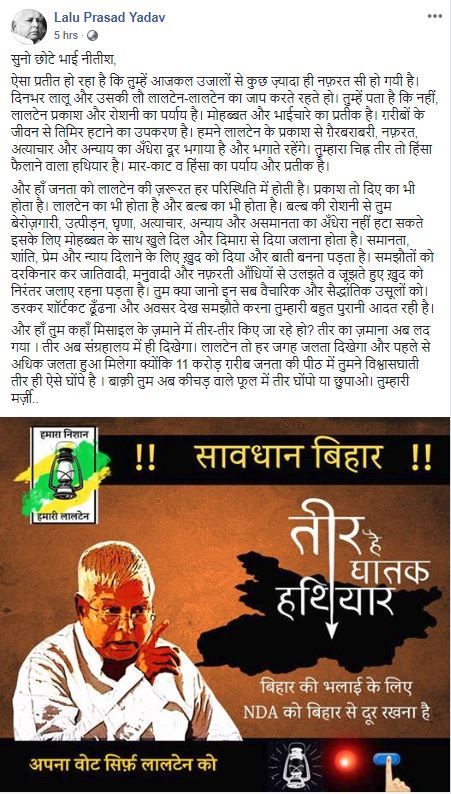 Nalanda, Patna Sahib, Pataliputra, Arrah, Buxar, Sasaram, Kurakat, Jahanabad constituencies in Bihar are yet to vote in the last phase of Lok Sabha elections on May 19. Results are scheduled on May 23.