Following Shatrughan Sinha's officially induction in the Congress party on Saturday the former BJP rebel leader has been fielded by the party on his sitting Bihar's Patna Sahib constituency, against Union Minister Ravi Shankar Prasad.

Following Shatrughan Sinha's officially induction in the Congress party on Saturday the former BJP rebel leader has been fielded by the party on his sitting Bihar's Patna Sahib constituency, against Union Minister Ravi Shankar Prasad.

The development came after the Central Election Committee of Congress released a new list of five candidates with less than a week to go for the 17th General Elections where Sinha has bagged the coveted seat.

As the list states, these are the new candidates - 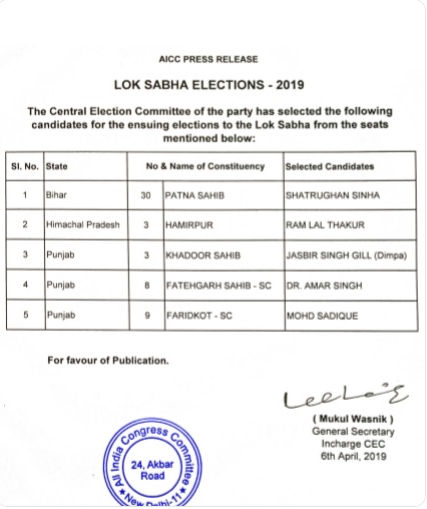 This comes as a win for Congress leader Shatrughan Sinha as he had hurled scathing remarks at  BJP last month for giving the party ticket for his sitting constituency to Union Minister Ravi Shankar Prasad.

.....Congress party, along with the alliance of Lalu and Tejasvi's RJD. Long live our great India. Jai Hind.

On March 26, when BJP announced that Union Minister Ravi Shankar Prasad will contest from the concerned constituency in the national election, Sinha retaliated saying that it has warned the party and that he can "answer back in the same coin."

The rebellious leader of his former party, he has often denounced BJP for the ticket denied to him, he further censured BJP's decision of fielding party president Amit Shah from patron LK Advani's bastion Gandhinagar seat. Amidst his criticisms, also arose speculations as to the power dynamics of the parties and the fight for the hot seat - Patna Sahib.

After an anticipated Uttar Pradesh's Amethi seat showdown between Rahul Gandhi-Smriti Irani, the contest in Patna Sahib also has intrigued the political-verse.

The Mahagathbandhan announced their seat-sharing formula last month, where RJD will be contesting 20 seats, Congress 9, leaving the rest out of 40 seats for other small parties.