In Gujarat, the home state of the Prime Minister and a stronghold of the BJP, the battle between the NDA alliance and the UPA alliance for the 28 Lok Sabha seats up for grabs which polled in the third phase of the Lok Sabha elections on April 23, saw the NDA retain the state winning all 26 seats while the UPA managed to win no seat.

With the all-important Lok Sabha polls concluding in the  world's largest democracy on Thursday, 1.3 billion citizens of India including an estimated 900 million-strong electorate now await the formation of the 17th Lok Sabha  with the 542 (the Vellore polls were countermanded) newly elected members to the lower house of India's Parliament and consequently, the process of forming the next government of India will enter its final stage.

After the thrilling counting day on May 23 which ended in a huge triumph for the NDA and commencement of the formation of Modi Sarkar 2.0, Republic Media Network  presents the results which ended in Prime Minister Narendra Modi getting re-elected and the NDA leading in majority of 354 seats while the UPA suffered a blow managing to garner 95 seats, as of 11:30 PM.

In Gujarat, the home state of the Prime Minister and a stronghold of the BJP, the battle between the NDA alliance and the UPA alliance for the 28 Lok Sabha seats up for grabs which polled in the third phase of the Lok Sabha elections on April 23, saw the NDA retain the state winning all 26 seats while the UPA managed to win no seat. 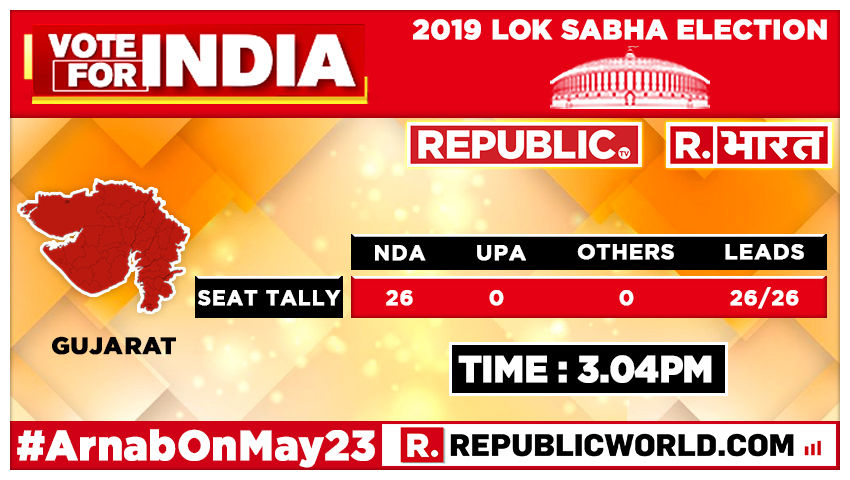 Republic Media Network called  the result on Sunday projecting an NDA win in  with country's biggest exit poll - the double exit poll in collaboration with the nation's biggest pollsters Jan Ki Baat and CVoter - which presented a projection including granular projections from each of the states and union territories. 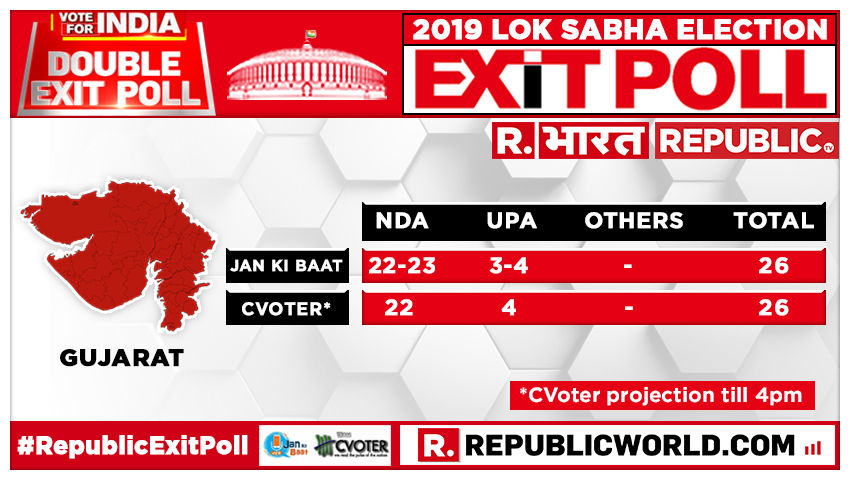 In north Gujarat and the Saurashtra region the BJP faced the major threat of anti-incumbency, the effects of the Patidar aggression and farmers' problems - in getting crop insurance claims, water scarcity and the high price of DAP and urea, unemployment and water shortage owing to poor rain which played in favour of the Congress.

Another factor which affected the votes were the minority population which sees the NDA as anti-minority power while the business community which constitutes a major chunk of the state saw the twin blows of GST and demonetisation as a setback to their trade.

While both BJP chief Amit Shah and PM Narendra Modi themselves had campaigned heavily in their home state stirring the nationalism in their denizens, propagating development and their home advantage, the Congress attacked the Prime Minister's failure to deliver targeting the issues of governance, agrarian and economic crisis, unemployment and lack of job creation, national security and women's safety.

Key battles in the state:

The main battle in Gujarat is centered in the Saurashtra region of Gujarat.

Junagadh: This region will see the battle between Koli candidates - BJP's Chudasama Rajeshbhai Naranbhai who is the sitting MP and the Leader of Opposition - Congress'  Vansh Punjabhai Bhimabhai.

Porbandar: Another Patidar dominated area will see the battle between BJP's Rameshbhai Lavjibhai Dhaduk and the Congress' Lalit Vasoya both of the local community.

In the 2014 General elections, Gujarat had a voter turnout of 63.6% in all phases in which all 26 seats were won by the NDA, while the UPA won none.

The last two Assembly elections (182 seats) are seen to follow a decreasing trend for the NDA as it decreased its win from 115 to 99 seats during 2017. While the voter turnout had decreased marginally in 2017 from 72.5% to 69.2%, the UPA increased its foothold as it increased its seat share from 61 seats to 77 seats in 2017 as post-demonetisation and GST effect.

In 2019, Gujarat has witnessed an average voter turnout of 64.11% in its single poll phases. 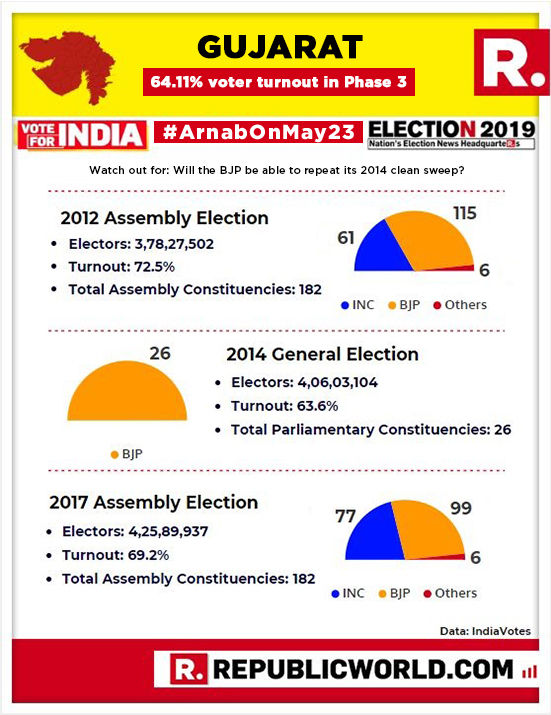 While 2017 saw a shift in the voting trend towards the Congress in the Assembly elections due to the demonetisation and GST implementation, the state witnessed a massive shift in loyalties when the face of the Patidar aggression- Hardik Patel joined the Congress putting the 3-year-long speculation over his political affiliation to rest.

After he joined the grand old party, his own poll plans were scuppered after the Gujarat High Court refused to stay his conviction in a 2015 rioting case rendering him ineligible. He has subsequently been campaigning for his party and has been condemning the Prime Minister for skirting the real issues and recently calling him a 'Yamraj sitting in Delhi'. He had also been publically slapped in a public rally.
Congress Chief Rahul Gandhi too stirred controversy when he commented: "how come all thieves have Modi as common surname" after which the Chief Judicial Magistrate of Surat summoned him in response a defamation suit filed by BJP legislator Purnesh Modi.

In other news, Rahul Gandhi ally and independent MLA from Vadgam, Jignesh Mewani who was the face of the 2016 Dalit aggression had fear mongered over the 10% reservation for the Economically Weaker Sections saying it was an RSS-BJP conspiracy against caste reservation. He has also publically campaigned for the AAP in New Delhi.