Ravindra Jadeja's father, Anirudhsinh, and sister, Nainaba, joined the Congress at an election rally in Kalavad city of Jamnagar district.

A month after Ravindra Jadeja's wife joined the BJP, the cricketer's father and sister has joined the Congress in Gujarat on Sunday in the presence of party leader and Patidar quota spearhead Hardik Patel.

Mr Jadeja's father, Anirudhsinh, and sister, Nainaba, joined the Congress at an election rally in Kalavad city of Jamnagar district. 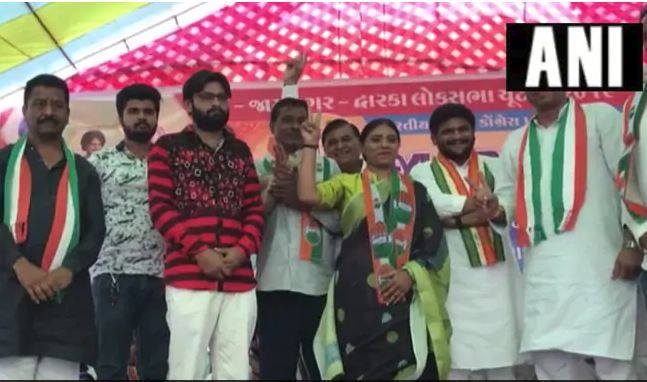 Ravindra Jadeja is from Jamnagar. The Congress candidate for Jamnagar Lok Sabha seat, Mulu Kandoriya, was also present at the event.

Hardik Patel was expected to be fielded by the Congress from Jamnagar, but the Patidar leader's chances were scuttled after the Supreme Court had on April 2 rejected the plea to stay his conviction in a case in which he was sentenced to two years in jail.

Earlier, over a few months after she joining the Karni Sena, Rivaba Jadeja, wife of Indian cricketer Ravindra Jadeja, joined the Bharatiya Janata Party (BJP). She joined the party in Gujarat in the presence of state Agriculture Minister R C Faldu and MP Poonam Madam.

In October, Rivaba had joined the pro-Rajput group Karni Sena as the President of Women's wing. Upon becoming a part of the group, she had expressed her happiness.

"My first goal would be to empower women to the level that they can fend for themselves, take care of themselves and defend themselves when men are not around and fight off any threats from perverted minds. This is my prime goal as I have personally been through such an experience," she had said.