Congress Bats For Dialogue, Promises Review Of Troop Deployment & AFSPA, And Assures No Change In Article 370 In J&K Section Of Its 2019 Election Manifesto. Read Here

With the Lok Sabha elections days away, the grand old Congress party has released in 2019 manifesto, encompassing the issues it promises to address.

With the Lok Sabha elections days away, the grand old Congress party has released in 2019 manifesto, encompassing the issues it promises to address.

Keeping Jammu and Kashmir as a crucial aspect of their manifesto, Congress has accentuated on the various issues of the state.

In their manifesto, they said that the party has been witness to the developments in the conflicted state since the Instrument of Accession that was signed on October 26, 1947. It further affirmed that 'the whole of Jammu and Kashmir is a part of India'

Here are the brief points mentioned in the manifesto: 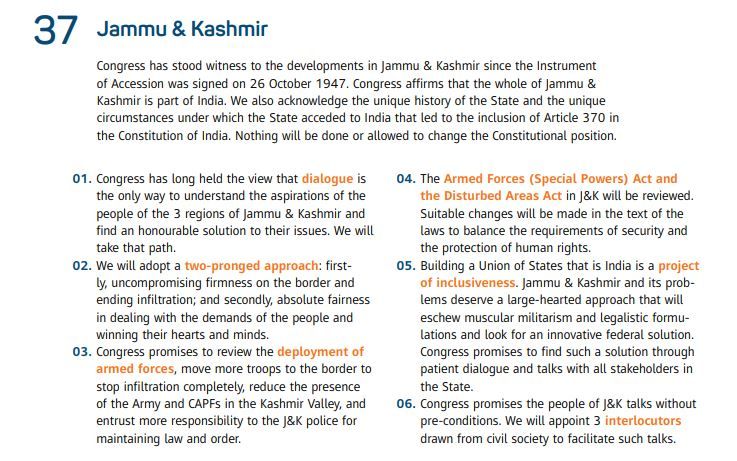 The grand old party had initiated a consultation process across the country and many of its top leaders had interacted with a host of people from different sections to seek their views on their aspirations from the party. The party's manifesto committee was headed by former Finance Minister P Chidambaram.

As per the party’s official estimates, it has received a total of 31,875 inputs on its official manifesto website

PEOPLE HAVE PLEDGED SO FAR
Congress Working Committee (CWC) meets in Delhi after election humbling, all eyes on fate of Rahul Gandhi as party president
PM Narendra Modi to visit his mother on Sunday to seek blessings; will be in Varanasi the day after. Here's what he said
SCOOP: Sonia Gandhi demands greater powers for Rahul Gandhi at CWC meeting after resignation rejection drama
IN PICTURES | Intimate moments from PM Narendra Modi's meeting with his mother Heeraben Modi in Gandhinagar, Gujarat after winning historic mandate in Lok Sabha elections
'Why should he resign?', says Sanjay Nirupam after Rahul Gandhi-led Congress bagged 52 seats in the Lok Sabha election 2019
DO NOT MISS
AZAD: 'WILL PAY FOR EVERY CRIME'
YOGI, RUPANI SNUBBED AFTER KEJRIWAL
CONGRESS QUESTIONS SENA ON CAA-NPR
SISTER LUCY LAUDS VICTIM'S COURAGE
HRITHIK & FAMILY'S MAHASHIVRATRI
PM MODI ON GENDER JUSTICE