After facing embarrassment over the Paraguay flag used in the tweet for 2019 Indian General elections, Congress president Rahul Gandhi's brother-in-law Robert Vadra deleted the tweet from his Twitter handle.

After facing embarrassment over the Paraguay flag used in the tweet for 2019 Indian General elections, Congress president Rahul Gandhi's brother-in-law Robert Vadra deleted the tweet from his social media handle.

After deleting the tweet with the Paraguay flag instead of the Indian flag, Robert Vadra posted a screengrab of the post he shared on his Facebook account after casting his vote in Delhi in the sixth phase of Lok Sabha polls on Sunday. Notably, he got the flag right in the Facebook post wherein he used the Indian tricolour, while he used the Paraguay flag in his tweet earlier.

In a new tweet, Priyanka Gandhi's husband shared the screengrab with a picture of his inked finger with the hashtag #LokSabhaElections2019. In the previous Twitter post, he urged the voters to step out and vote to create a combined future for the loved ones and for a secular, safe, productive future of the country. After the message, he posted an emoticon of a flag.

However, he posted the flag of Paraguay instead of the Indian flag in his message to voters after exercising his franchise. 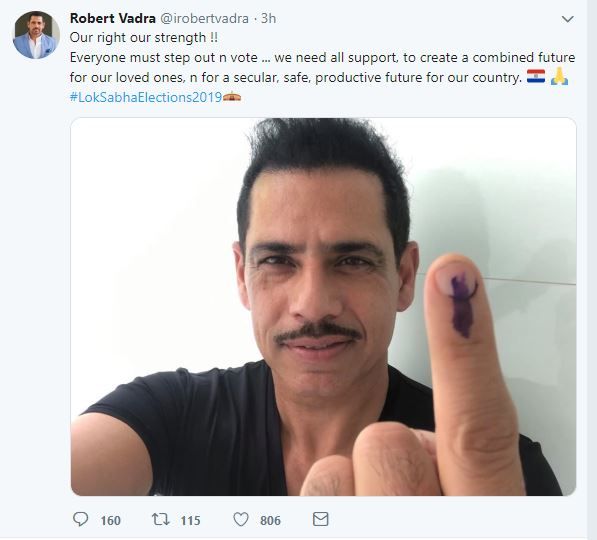 He also shared the pictures of the Gandhi family members with their inked fingers after they placed vote in Delhi in the sixth phase. Robert Vadra was accompanied by his wife and Congress's General Secretary for UP East Priyanka Gandhi. Congress president Rahul Gandhi also placed his vote in Delhi at a polling booth in NP Senior Secondary School in Aurangzeb Lane. Sonia Gandhi also cast her vote on Sunday in Nirman Bhawan poll booth in New Delhi.

Ahead of voting, Robert Vadra urged the voters to vote and make the change they desire for a better future for them and for the next generation:

Vote and make the change you desire, for a better future for you n for the next generation . #Phase6 #LokSabhaElections2019 pic.twitter.com/t5V9BUrsEE

PEOPLE HAVE PLEDGED SO FAR
'Took a quick break and came to Delhi for this': Sidharth Malhotra casts his vote as India goes to polls for Phase 6 of General Elections 2019
Dhoni is an era of cricket, almost like leader of a nation: Matthew Hayden
Transgenders excited to cast vote first time under gender identity of their choice
Congress can never die, country needs it: Ashok Gehlot
IN PICTURES | Intimate moments from PM Narendra Modi's meeting with his mother Heeraben Modi in Gandhinagar, Gujarat after winning historic mandate in Lok Sabha elections
'Why should he resign?', says Sanjay Nirupam after Rahul Gandhi-led Congress bagged 52 seats in the Lok Sabha election 2019
PM Narendra Modi to visit his mother on Sunday to seek blessings; will be in Varanasi the day after. Here's what he said
Congress worker shaves off head after losing bet to BJP counter-part on subject of the next Prime Minister
DO NOT MISS
TRUMP MENTIONS SACHIN, KOHLI
PM HIGHLIGHTS REPEAT OF HISTORY
HEAD CONSTABLE KILLED IN CLASHES
DELHI L-G URGES RESTRAINT
CONGRESS DOUBTS TRUMP'S MOTIVE
CHENNAI CHEF CREATES TRUMP IDLIS