From 'Champion Sectors' To 'Study In India': Here's What The BJP Is Promising The Youth In Its 2019 Election Manifesto 'Sankalp Patra''

The BJP has launched its 'Sankalp Patra' election manifesto at an event at its New Delhi headquarters on Monday in the presence of PM Narendra Modi, BJP president Amit Shah, Finance Minister Arun Jaitley and other leaders of the party.

The BJP has launched its 'Sankalp Patra' election manifesto at an event at its New Delhi headquarters on Monday in the presence of PM Narendra Modi, BJP president Amit Shah, Finance Minister Arun Jaitley and other leaders of the party.

Terming its manifesto as 'will of the people', the party presented its vision and promised the youth of the country new opportunities of employment.

Speaking about the youth of the Nation, Prime Minister Narendra Modi said:

"India is a youthful country. A country with such a major percentage of youth has the capability to change not only its own, but fate of the entire world."

Some of the highlights on promises that the BJP did to the youth of the nation in its 'Sankalp Patra' are, under 'Yuva Bharat, Tomorrow's India':

Here is the complete section: 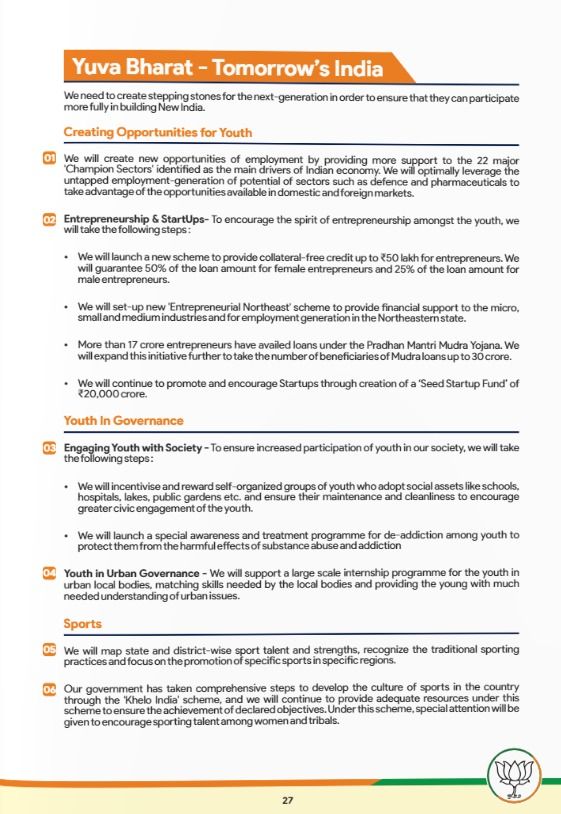 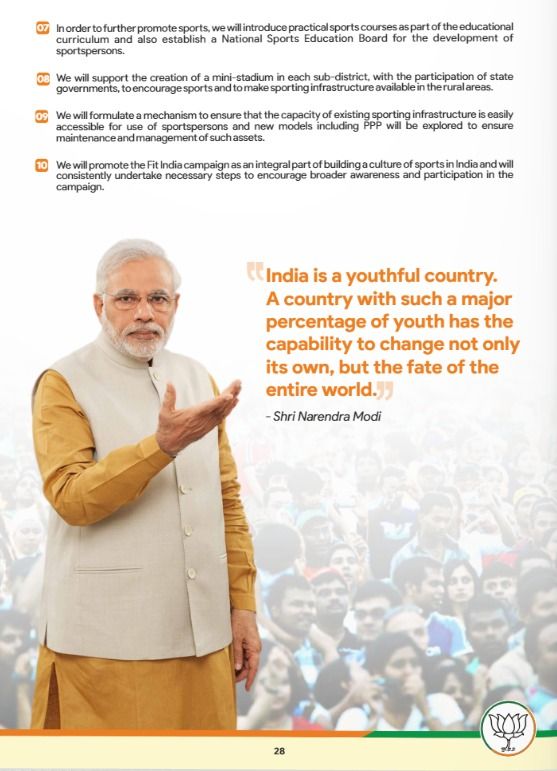 PEOPLE HAVE PLEDGED SO FAR
MUST READ: BJP's '75 milestones for India at 75' that the party is promising by 2022. All 75 promises here
'7700 suggestion boxes, 300 rath...': As BJP releases its 'Sankalp Patra', here's Rajnath Singh's note on how the party's 2019 Lok Sabha manifesto was formulated
From Ram Mandir and Sabarimala to Bharatiya Cultural Festival and Uniform Civil Code: Here's the BJP's 'Cultural Heritage' promise in its 2019 Lok Sabha election manifesto
'Why should he resign?', says Sanjay Nirupam after Rahul Gandhi-led Congress bagged 52 seats in the Lok Sabha election 2019
Indian-American supporters of BJP organise victory parties across US
Prime Minister Modi pays his tribute to Jawaharlal Nehru on his 55th death anniversary, says nation remembers the contribution of the first PM
'Rahul Gandhi offered resignation, CWC rejected, requested him for his guidance and leadership': Congress statement on post-elections meeting
China keen to work with re-elected PM Modi to further deepen bilateral ties
DO NOT MISS
BJP: 'WE ARE USED TO LAL MIRCHI'
CONG RELEASES LIST OF CAMPAIGNERS
CJI: ASSAM-TRIPURA PLEAS SEPARATE
KEJRIWAL LAUDS MP GOVT'S SYSTEM
SHIV SENA REFUTES CONGRESS
LIFE INSURANCE FOR NRI IN INDIA