GONE IN 365 DAYS: Here's How The Mahagathbandhan Has Journeyed From Mega Photo-op On HD Kumaraswamy Swearing-in Ceremony

With the country having completed three phases of Lok Sabha elections and gearing up for the fourth phase, political party across the spectrum are having heated arguments and their blame-games are increasing.

With the country having completed three phases of Lok Sabha elections and gearing up for the fourth phase, political party across the spectrum are having heated arguments and their blame-games are increasing. While the BJP is witnessing a boost with the celebrities and army veterans joining the party and a return of Modi-wave in Prime Minister Narendra Modi's roadshow in Varanasi, the Opposition remains unsure about its Mahagathbandhan that surfaced on March 24, 2018, on the swearing-in ceremony of Karnataka Chief Minister HD Kumaraswamy.

With the massive Opposition unity photo on the swearing-in ceremony of Kumaraswamy, to the Congress leader Salman Khurshid making a 'choor-choor' remark on the SP-BSP-RLD alliance in Uttar Pradesh, here's a look at how the Mahagathbandhan has journeyed so far:

"We have all come here. We are very happy Kumaraswamy is the CM. In future also we'll be together. We are watching and want to promote more and more regional parties. We want to express our solidarity" - N Chandrababu Naidu, Andhra Pradesh CM

"We are very happy that Kumaraswamyji is taking oath. We will keep in touch with all the regional parties. Our vision is very clear. Congress is also a separate party. We are here to support JD(S) as a regional party. "Jo humse takrayega, woh choor-choor ho jayega" - Mamata Banerjee, West Bengal CM 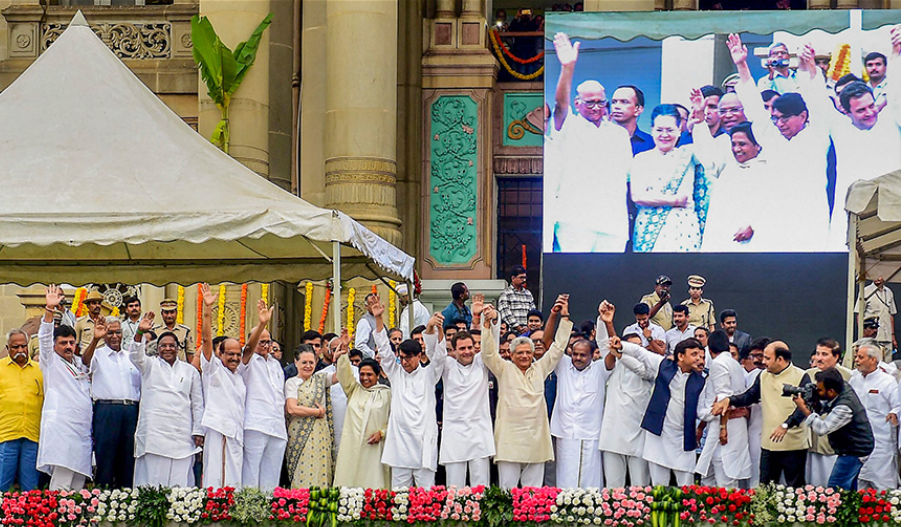 He was quoted as saying by news agency ANI: “I am in pain. Six months have completed since Kumaraswamy became Chief Minister. All kinds of things have happened in these six months, till now I have not opened my mouth but I can’t keep quiet now,”

An alliance between the Congress & AAP in Delhi would mean the rout of the BJP. The Congress is willing to give up 4 Delhi seats to the AAP to ensure this.

But, Mr Kejriwal has done yet another U turn!

Our doors are still open, but the clock is running out. #AbAAPkiBaari

PEOPLE HAVE PLEDGED SO FAR
Ram Vilas Paswan mocks Congress for failing to get LOP position
YSRCP chief Jagan Mohan Reddy to meet PM Modi in New Delhi on Sunday before taking oath as Andhra Pradesh CM on May 30
China keen to work with re-elected PM Modi to further deepen bilateral ties
WATCH: "People made fun of me when I said we will cross 300 seats," says PM Modi, adding that the word 'Wave' seemed less while describing the 2019 election victory at BJP headquarters, Ahmedabad
UK PM Theresa May sends a message to PM Modi as he storms back to power; latter asserts commitment towards strengthening of ties
DO NOT MISS
ANTI-PAKISTAN PROTESTS IN LONDON
3 JDU LEADERS SUPPORT RJD CAMPAIGN
KOHLI CONGRATULATES TENDULKAR
NEW RECORDS FOR MAN UNITED
UDDHAV'S NEW TWIST TO KOREGAON
KISHOR'S TAKE ON KANHAIYA