"I Am Shocked To Hear My Name Again In Your Rally": Robert Vadra Rages At PM Modi. Here's His Post

Congress president Rahul Gandhi's brother-in-law has taken to Facebook and written a post to Prime Minister Narendra Modi alleging that he has been at the receiving end of "complete harassment for the last 5 years" by Modi government.

Congress president Rahul Gandhi's brother-in-law Robert Vadra on Wednesday has taken to Facebook and written a post to Prime Minister Narendra Modi alleging that he has been at the receiving end of "complete harassment for the last 5 years" by the government.

Stating that he is "shocked" that he hears his name again in PM Modi's rally, he claimed that the "relentless notices from various agencies, courts and tax department, have mentally pressurized him. He further stated that while he has been summoned by the Enforcement Directorate 11 times, not one allegation has been proven yet.

"11 times being summoned to depose each of 8 to 11 hours with the Enforcement Directorate, in different parts of the country, Court depositions n related orders, etc. BUT NOT ONE allegation has been proven," Robert Vadra wrote in his post.

WATCH: Arvind Kejriwal Slams Modi Government Over Not Being Able To Act Sufficiently On Robert Vadra

He asked the Prime Minister and to "stop personal attacks" on him adding he has faith in the Indian judiciary and the truth shall prevail. 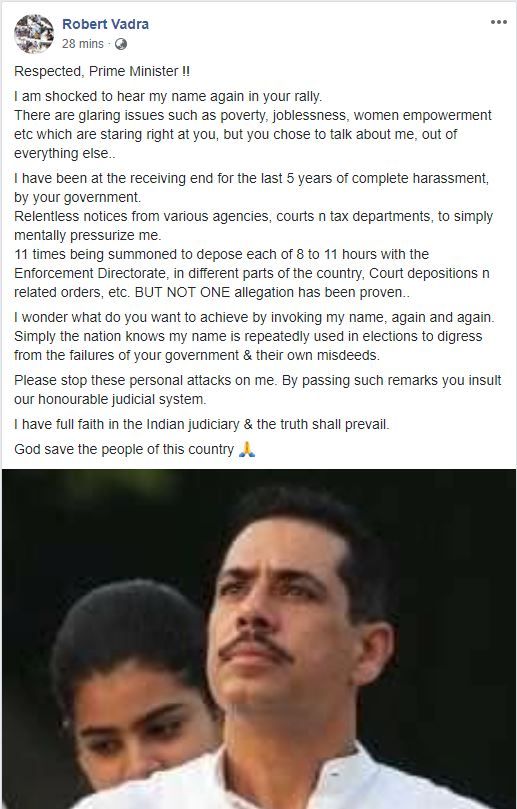 Earlier taking to Twitter, Congress General Secretary Priyanka Gandhi's husband Robert Vadra had hit out at Union Minister Smriti Irani asking her to concentrate on the election instead of taking a jibe at him. He had launched a personal attack at the Union Minister, targeting her educational qualifications.

He said, "India wants to know about your degree/qualifications and the underlying controversy with it".

Asking her to clarify on her educational qualifications, Congress' star campaigner Robert Vadra further added that 'no disclosure or reply means you are not':

Smriti Irani ji,wid due respect,pls conc on elections instead of taking jibes at me.India wants to knw abt ur deg/qualifications & underlying controversy with it. First u clarify that&then point finger at others.Awaiting to c if u r qualified. No disclosure or reply means u r not pic.twitter.com/Z51DppHNaY

WATCH: "Our Family Fought Against Raja-Maharajas," Retorts Priyanka Gandhi Vadra In Response To PM Modi Using The Dynasty Moniker While Speaking Of Allegations Against Robert Vadra