The Congress has decided to field Manish Tewari from Anandpur Sahib, Punjab and Jyotiraditya Scindia from Guna in Madhya Pradesh. The announcement comes a day after the first phase of the Lok Sabha elections was held.

The Congress has decided to field Manish Tewari from Anandpur Sahib, Punjab and Jyotiraditya Scindia from Guna in Madhya Pradesh.

The announcement comes a day after the first phase of the Lok Sabha elections was held.

Below is the Congress Central Election Committee's candidate lost for the Lok Sabha polls: 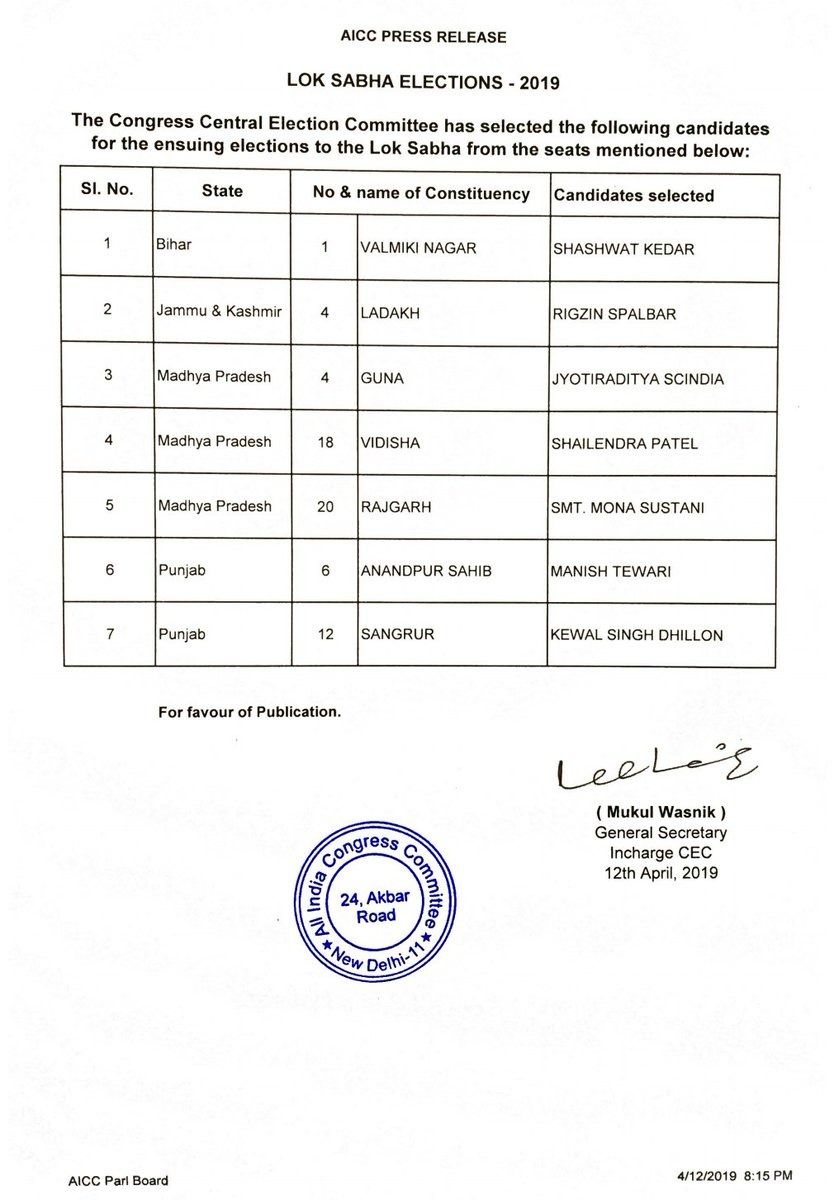 Republic TV had earlier reported that Tewari was vying to contest from Chandigarh seat but it was given to Pawan Kumar Bansal. Tewari had been given a ticket from Ludhiana in 2014 but did not contest because of health issues.

Jyotiraditya Scindia who is the Congress general secretary (West) will be fielded from Guna, Madhya Pradesh from where he is the sitting MP.

Scindia who was the Minister of State for Power in November 2012 following a reshuffling of the cabinet during the UPA rule, was earlier believed to be in a power tussle between Kamal Nath for the post of Madhya Pradesh CM and was also believed to share the post with him. However, the post went to Kamal Nath.

Following the are projections from the National Approval Ratings carried by Republic TV and CVoter:

The state of Punjab presents an interesting scenario. The Captain Amarinder Singh-led Congress government is in power in the state having dislodged the BJP-Akali Dal alliance in the 2017 assembly elections. The Aam Aadmi Party is also looking at Punjab to make an expansion. With 13 seats up for grabs, here is the projection for the state of Punjab:

Sending 29 seats to the Lok Sabha, Madhya Pradesh is a state coveted state by both Congress and BJP. The battle is likely to get highly interesting on account of the recent assembly election results, when the Congress overturned years of BJP rule to form a government in the state.

READ | National Approval Ratings: UPA Projected To Rout Lok Sabha Polls In Punjab, NDA May Have To Settle For Just One Seat

Here's the projection for the state of Madhya Pradesh:

PEOPLE HAVE PLEDGED SO FAR
Ayushmann Khurranna announces 'Jam Sessions' to combine his love for music and power of social media to scout for new talent. Here's how to get in on it
Vijay Mallya fails to delay USD 40mn Diageo claim, legal costs mount in the UK
"You will never let this country remain in peace," says SC junking plea for worship at Ayodhya site
'Our only loyalty is to the Constitution,' says PM Narendra Modi bowing down to it in the Parliament
FULL 2019 Lok Sabha Election results: BJP wins 303 seats, Congress wins 52; all results from all states here
WATCH: PM Modi addresses PMO staff after election win, hails virtues of efficiency
POLITICAL SCOOP: Congress faction wants Capt. Amarinder Singh as Congress chief amid Rahul Gandhi resignation drama at CWC meeting
PM Narendra Modi to visit his mother on Sunday to seek blessings; will be in Varanasi the day after. Here's what he said
DO NOT MISS
KANHAIYA KUMAR'S FIRST RESPONSE
INDIA TO ATTEND PEACE DEAL SIGNING
AMIT SHAH ATTACKS  MAMATA ON CAA
'WON'T BE SILENT' SAYS THUNBERG
'I RECEIVED DEATH THREATS'
AJAY-DEEPIKA-AKSHAY IN TRIPLE CLASH