In a super exclusive newsbreak, the Ministry of Home Affairs has sent a notice to the Congress President, seeking an explanation in the matter of his citizenship.

In a super exclusive newsbreak, the Ministry of Home Affairs has issued a notice to the Congress president Rahul Gandhi on Tuesday, seeking an explanation in the matter of his citizenship. This development has come days after serious questions were raised on Rahul Gandhi's citizenship, name and educational qualifications.

The Home Ministry, in the notice, has requested him to 'intimate the factual position in the matter to the Ministry within a fortnight of the receipt of the notice'.

The MHA has written to Rahul Gandhi , following a complaint by BJP MP Dr Subramanian Swamy to the ministry seeking clearance in the matter of Congress president's citizenship.

"It has been brought out that a Company named Backops Limited was registered in the United Kingdom in the year 2003, with address 51 Southgate Street Winchester, Hampshire S023 9EK and that you were one of the Directors and Secretary of the said Company. It has been further brought out that in the Company's Annual Returns filed on 10/10/2005 and 31/10/2006, your date of birth has been given as 19/06/1970 and that you had declared your nationality as British," the Director, Citizenship has written in the notice to Rahul Gandhi. 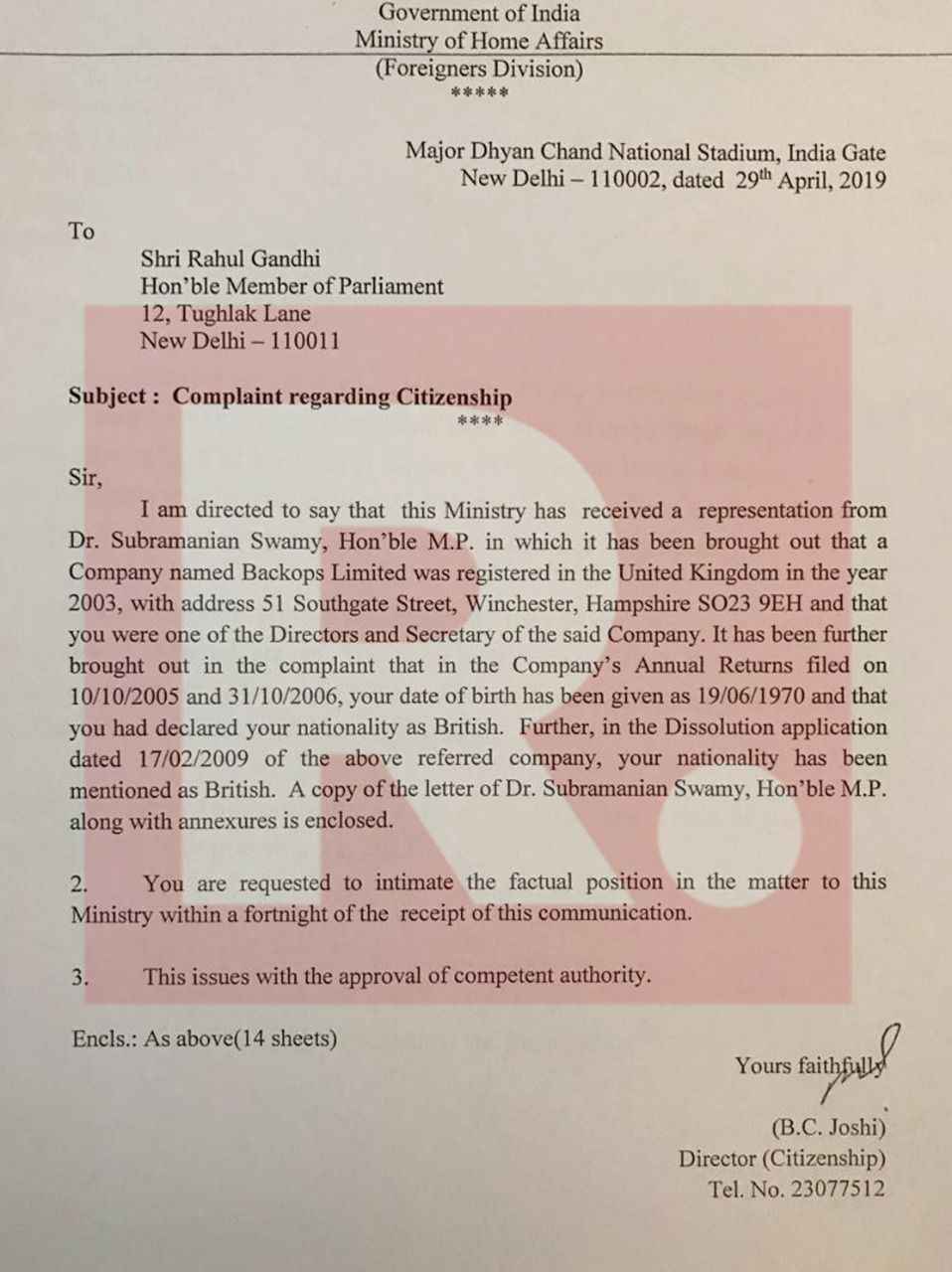 On April 20, an independent candidate and a resident in Uttar Pradesh's Amethi, Dhruv Lal, submitted an 11-page complaint to Amethi's returning officer, raising objections on the nomination papers of the Congress chief. The allegations against Rahul Gandhi included questions being raised over his real name, citizenship and his educational qualifications.

In the 11 page complaint, Lal made scathing allegations against the Congress President had declared his nationality as "British" in the Memorandum of Association and Annual Return for the period ending 21st August 2005 of a British company, namely Backops Limited, where he allegedly served as a Director.

As per Lal, "The Candidate (Rahul Gandhi) has admitted in his Election Affidavit dated 03.04.2004 that he held shares in the Company named, Backops Limited, Britain. Memorandum of Association and Annual Return for the period ending 21.08.2005 of the said Company record Candidate’s nationality as "British" and his address is in the United Kingdom."

PEOPLE HAVE PLEDGED SO FAR
Congress lines up star campaigners for Delhi to blaze the campaign trail for party ahead of 2019 Lok Sabha polls
Mamata Banerjee responds to PM Modi's 'kurta' revelation during interview, says 'Don't send kurta to him only, but to many people'
Placard campaign saying 'Don't be like Swara this election' catches Bhasker's attention, actor fires back at shaming of her viral 'Veere De Wedding' scene
Congress worker shaves off head after losing bet to BJP counter-part on subject of the next Prime Minister
READ: Congress debacle in 2014 vs Congress disaster in 2019, seat by seat comparison of party's performance in Lok Sabha elections
"Your continued commitment... ", says Bill Gates as he congratulates PM Modi on his 'remarkable win'
PM Narendra Modi may visit his constituency Varanasi before swearing-in ceremony
SCOOP: Sonia Gandhi demands greater powers for Rahul Gandhi at CWC meeting after resignation rejection drama
DO NOT MISS
ROMI DEV ON '83'
SOUVENIR TO BE GIFTED TO TRUMP
SHAHEEN BAGH MEDIATOR MOVES SC
SPECIAL 'ALL-VEG' MENU FOR TRUMP
THACKERAY SLAMS BJP
SHARMA BAGS 11TH 5-WICKET HAUL