A day after the Congress party ended speculations of Priyanka Gandhi Vadra contesting from the Varanasi Lok Sabha constituency by fielding Ajay Rai, her husband Robert Vadra said that people want to him to contest elections but 'it will happen at the right time'.

A day after the Congress party ended speculations of Priyanka Gandhi Vadra contesting from the Varanasi Lok Sabha constituency by fielding Ajay Rai, her husband Robert Vadra said that people want to him to contest elections but 'it will happen at the right time'.

In a Facebook post that Robert Vadra posted on Friday morning, he wrote that people believe that he can bring change in the area and want him to represent them. He, however, added that he is taking time to understand them and making small efforts to make their lives better before he represents them.

"They live by hope n feel I can change their area, by representing them.
But I need to learn n understand more n earn my place, by working with them n making smaller changes myself, for them.
The larger scale will be at the right time," Robert Vadra wrote.

Pictures posted by Vadra on the social media platform showed people holding placards with pictures of his wife and Congress General Secretary Priyanka Gandhi Vadra and him, urging them to represent them in the Parliament.

Robert Vadra says people want him to represent them, a day after Congress gives clarity on Priyanka Gandhi Vadra's candidacy from Varanasi against the PM 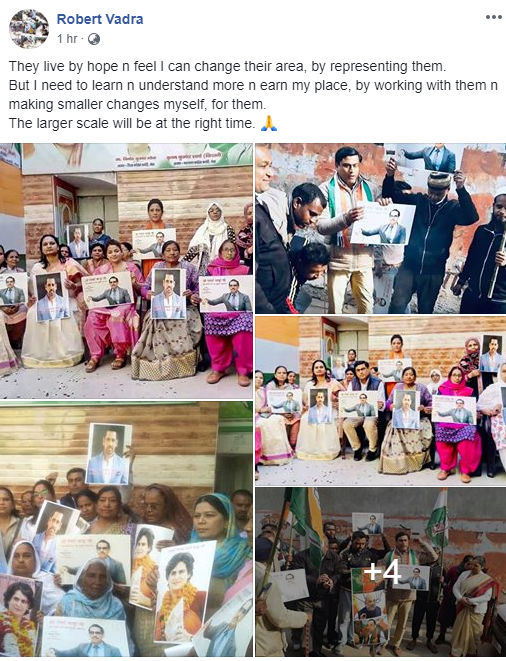 The latest political tease by the 'private citizen' comes less than two weeks after he had said that when he does make his political entry, he would do so with full force:

The Congress party had earlier created speculations of Priyanka Gandhi Vadra contesting against Prime Minister Narendra Modi from Varanasi with Priyanka expressing her desire to contest if the Congress chief and her brother Rahul Gandhi takes the decision. Nevertheless, the party on Thursday fielded local strongman Ajay Rai against the PM.

Five-time MLA from Uttar Pradesh Ajay Rai is a local strongman in the area for the Congress party. While he started his political journey as a BJP leader, in 2009 he joined the Indian National Congress. In 2014 General Elections, Ajay Rai was the Congress candidate from Varanasi against BJP's prime ministerial nominee Narendra Modi. However, he lost to PM Modi, coming third after AAP convenor Arvind Kejriwal.

SCATHING: "Myths Of Priyanka Gandhi Stand Eroded," Says Arun Jaitley After Congress Does Not Field Her Against PM Narendra Modi In Varanasi

The BJP has criticised the Congress party for not fielding Priyanka despite creating suspense around the seat. In his blog he wrote:

"The myths of Priyanka Gandhi stand eroded. India’s conventional wisdom has been ‘बंद मुट्ठी लाख की, खुल गयी तो ख़ाक की’. The myth of ‘Priyanka will make a difference’ was worth a lakh. Today, the myth has lost its value. The cards are out in the open for public scrutiny. The Gandhis must introspect the plight of Amethi and RaeBareli in the last forty years and compare it to what the Prime Minister has done in Varanasi in the past five years."

With Uttar Pradesh going to polls in all seven phases, Varanasi will vote in the last phase of the Lok Sabha election on May 19. Counting of votes will take place on May 23.

READ: Not Priyanka Gandhi, Congress Fields Ajay Rai As Its Candidate From Varanasi To Contest Against PM Modi In 2019 Lok Sabha Polls