As per the projections by the Jan Ki Baat Exit Poll, National Democratic Alliance (NDA)-led by Prime Minister Narendra Modi is projected to clinch an estimated seat-share between 295 and 315 in the 2019 Lok Sabha elections. Out of this, the BJP is predicted to secure an estimated seat-share between 254 and 274, with the 264 median falling eight seats short of the half-way mark. In comparison, in 2014, the BJP had won 282 seats on its own.

The Jan Ki Baat exit poll further predicts that the United Progressive Alliance (UPA)-led by Congress is projected to a win between 122 and 125 seats, with Congress predicted to secure 71 to 74 of these. In 2014, the Congress had fared dismally winning just 44 seats.

The remaining non-NDA and non-UPA parties or 'Others' are projected to win 102-125 seats, out of which in the electorally critical state of Uttar Pradesh, the Samajwadi Party-Bahujan Samaj Party 'Mahagathbandhan' has been projected to win 21-32 seats (26).

Here are the numbers as per Jan Ki Baat projections: 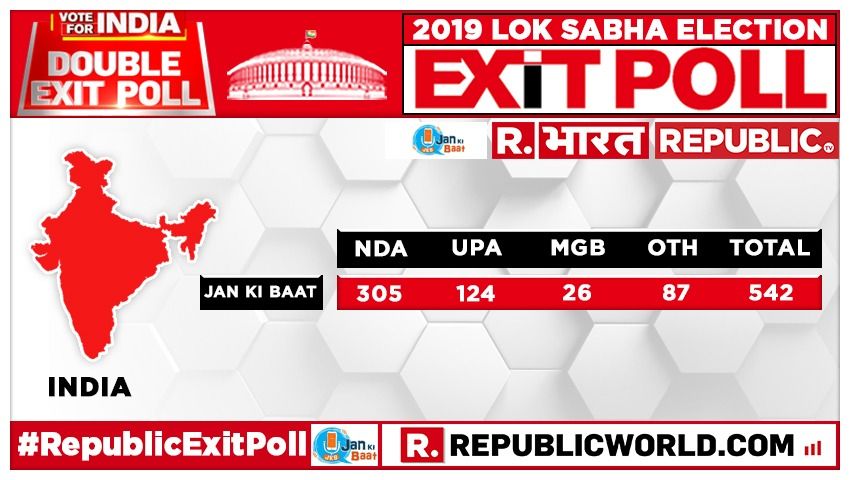 The median of Jan Ki Baat Exit Poll projects the BJP-led NDA alliance to secure the majority with an estimated 305 seat-share in the 2019 Lok Sabha elections, which is, however, 31 seats lower than NDA's victory number in the 2014 General Elections, which was an overwhelming 336 seats. The UPA-led by Congress is projected to lag far behind with an estimated median seat-share of 124.

Here are the state-wise projections of the Republic Media Network Double Exit Poll in collaboration with CVoter and Jan Ki Baat:

The 2019 elections saw high-octane electric campaigning from both sides as the BJP went hammer and tongs, expressing confidence at each turn that it would not only repeat but also better its tally of 282 votes from five years earlier, whereas the Congress and other Opposition parties, especially West Bengal Chief Minister Mamata Banerjee also campaigned heavily though without being able to make any convincing show of unity.

MUST READ: These Are The 30 Biggest Battles In The 2019 Lok Sabha Elections To Look Forward To On Counting Day

MUST READ: 10 Sensational Republic Media Newsbreaks That Set The Agenda In The 2019 Lok Sabha Elections

PEOPLE HAVE PLEDGED SO FAR
Congress Working Committee (CWC) meets in Delhi after election humbling, all eyes on fate of Rahul Gandhi as party president
'Why should he resign?', says Sanjay Nirupam after Rahul Gandhi-led Congress bagged 52 seats in the Lok Sabha election 2019
FULL INTERVIEW: Smriti Irani speaks to Arnab Goswami after defeating Rahul Gandhi in Amethi in the 2019 Lok Sabha elections
'Rahul Gandhi offered resignation, CWC rejected, requested him for his guidance and leadership': Congress statement on post-elections meeting
'Our only loyalty is to the Constitution,' says PM Narendra Modi bowing down to it in the Parliament
DO NOT MISS
INDIA LEGENDS' SQUAD ANNOUNCED
ANOTHER JAMIA VIDEO EMERGES
SIBAL SLAMS CENTRE AND POLICE
CORONAVIRUS UPDATES ACROSS INDIA
AKHILESH YADAV SLAMS BJP OVER JAMIA
AMERICANS EVACUATED FROM SHIP