What comes as a major embarrassment to the Congress party, Rahul Gandhi on Monday in the Supreme Court admitted that he made the statements over the Rafale case in the “heat of political campaigning”, adding that he "regrets" his comments.

What comes as a major embarrassment to the Congress party, Rahul Gandhi on Monday in the Supreme Court admitted that he made the statements over the Rafale case in the “heat of political campaigning”, adding that he "regrets" his comments. Rahul Gandhi made the admission in the reply to the petition filed by BJP MP Meenakshi Lekhi, in the Supreme Court on April 12, seeking contempt proceedings against the Congress president for attributing his remarks on the recent Rafale verdict to the apex court.

Responding to Republic's tweet over the development, Union Minister Smriti Irani called out Rahul Gandhi over his admission that he "lied".

"The truth has defeated the lie. The one who used to call the Chowkidar chor (thief), Rahul Gandhi has admitted that he is a liar. The nation will not forgive those who think the people of the nation are foolish, and those who insulted the Priem Minister and the top court," she wrote to Twitter. 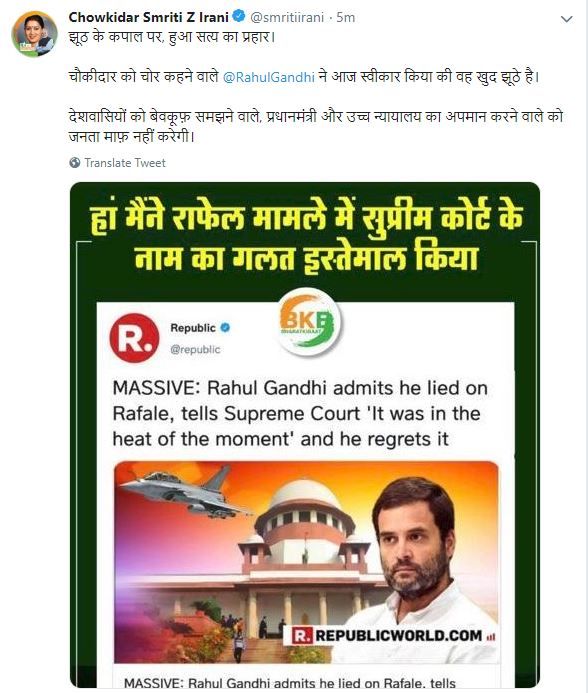 READ | MASSIVE: Rahul Gandhi Admits He Lied On Rafale, Tells Supreme Court 'It Was In The Heat Of The Moment' And He Regrets It

In affidavit filed by Rahul Gandhi in the Supreme Court in response to the Meenakshi Lekhi's contempt petition, he, not once, but twice has admitted that he made the statement "in the heat of political campaigning", adding that he "regrets" his statements.

"My statement was made in the heat of political campaigning. It has been used (and misused) by my political opponents to project that I had deliberately and intentionally suggested that this Court had said Chowkidar Chor Hai! It is also clear that no court would ever do that and hence the unfortunate references (for which I express regret) to the court and to the political slogan in the juxtaposition the same breath in the heat of the political campaigning our not be construed as suggesting that the court had given any finding or conclusion on that issue," the affidavit reads.

BJP MP Meenakshi Lekhi, who filed the complaint said that she is satisfied to the extent that Rahul Gandhi's lie has been exposed.

Speaking to Republic TV minutes after Rahul Gandhi said in the apex court that he gave the Rafale comment in 'the heat of the political campaigning' and expressed regret for the same, Lekhi said:

"I will wait for Court's verdict as it is sub-judice. One thing is clear that Rahul Gandhi gave a false statement and tried to influence minds of voters. I will wait for the court to give their verdict. He stands exposed and the voters of the country should take cognisance of this.

Rahul Gandhi triggered the controversy saying that "Supreme Court has accepted that 'Chokidar Chor Hai'", while addressing the press in Uttar Pradesh after filing his nomination papers in Amethi.

WATCH: This Is The Lie That Rahul Gandhi Said That The Supreme Court Has Pulled Him Up For

PEOPLE HAVE PLEDGED SO FAR
Here's what Parthiv Patel said about his sensational run-out of MS Dhoni in the CSK-RCB thriller
Arbaaz Khan hints at his second marriage, says, 'good chance it might happen in my life again'. Read here
WATCH: Alia Bhatt reacts to Kalank's damp squib at the box office as it earns a low figure for a 5-day weekend. Here's what she said
'Why should he resign?', says Sanjay Nirupam after Rahul Gandhi-led Congress bagged 52 seats in the Lok Sabha election 2019
Congress worker shaves off head after losing bet to BJP counter-part on subject of the next Prime Minister
Lok Sabha Elections 2019 | 'Sincerity always pays': Anupam Kher congratulates wife Kirron Kher for her 'stupendous' second-time victory from Chandigarh
‘The BJP's win is the people's verdict but happy that it is not Tamil Nadu's verdict’: Kamal Haasan
WATCH: PM Narendra Modi addresses NDA leaders in Parliament's Central Hall after they unanimously endorse him to be Prime Minister again
DO NOT MISS
TRUMP & MUKESH AMBANI INTERACT
FADNAVIS SLAMS MVA GOVT
TRUMP ON KASHMIR
AFFIDAVIT IN SC ON DELHI VIOLENCE
MALANG BOX OFFICE COLLECTIONS
SAMI'S 3 PRO-NAMASTE TRUMP REASONS