Hours after Congress released its elections manifesto for the 2019 polls, BJP president Amit Shah pierced into the Rahul Gandhi-led party for promising a principle imposing restrictions on the investigative agencies and announcing amendments in the Code of Criminal Procedure to ensure that 'bail is the rule and jail is the exception' in its manifesto.

Addressing a rally in Tamil Nadu's Sivaganga, the BJP president claimed that the provisions in the Congress manifesto were meant for the benefit of former Union Minister and Congress leader P Chidambaram and his son Karti Chidambaram, who are being investigated in the Aircel-Maxis case by the ED and CBI.

"In their manifesto, Rahul Gandhi has announced that all should get bail and no one should be put behind bars. Probably, it's meant for Karti Chidambaram," said Amit Shah, speaking at the Tamil Nadu rally.

In their manifesto, the Congress has announced that all should get bail and no one should be put behind bars. Probably, it's meant for Karti Chidambaram: Shri @AmitShah #BharatBoleModiModi

Earlier, Union Minister Arun Jaitley came down on heavily on the Congress party for the proposal to amend the Code of Criminal Procedure and said:

"The move by a party which has several top leaders including Rahul Gandhi, Sonia Gandhi and P Chidamabaram, who headed the panel to create the manifesto, out on bail in cases of corruption, signals to a motive to dilute the fight against corruption. People get bail for minor crimes. As per the manifesto, the Congress wants the CrPC to be amended so any terrorist or a major criminal... this role belongs to the Judiciary. So for those who commit huge crimes, kill CRPF or people working for the state, this amendment is for the protection of the Maoists, they get bail after some time."

In the manifesto on page 35, Congress has promised to: 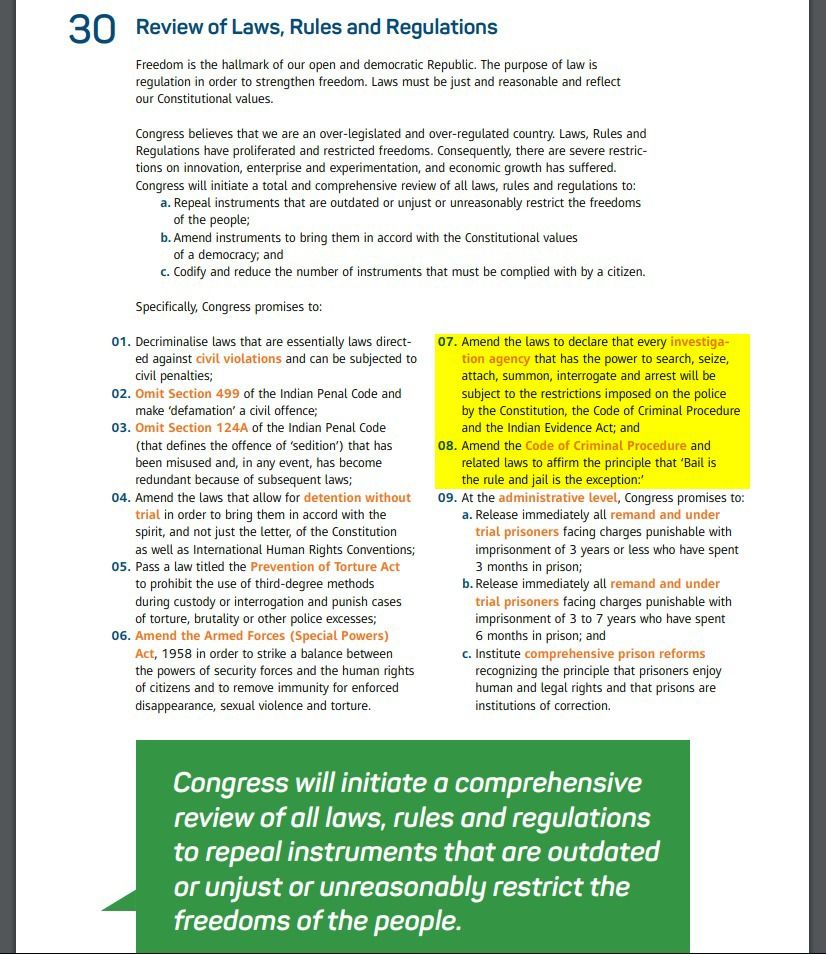 This 'promise' in Congress' election manifesto has come at a time when some of the most important leaders in the Congress are facing court proceedings in various cases. While both Congress president Rahul Gandhi and UPA chairperson Sonia Gandhi are out on bail in the National Herald case, Priyanka Gandhi Vadra's husband Robert Vadra was given anticipatory bail in a money-laundering case just a day before the Congress manifesto was released.

WATCH: "I Seem To Have Read The Manifesto More Than The Congress President", Says Arun Jaitley In Blistering Point-by-point Takedown Of Rahul Gandhi's 2019 Vision Document