WATCH: "Being An Anti-national Will No Longer Be A Crime," Says Arun Jaitley In His Stinging Counter To Congress' Manifesto Promise Of Scrapping Sedition Law

Finance Minister Arun Jaitley on Tuesday launched a stinging counter to Congress' manifesto for the upcoming Lok Sabha polls, calling the promises by the grand old party as against 'national unity'

Finance Minister Arun Jaitley on Tuesday launched a stinging counter to Congress' manifesto for the upcoming Lok Sabha 2019 polls earlier in the day, calling out the promises by the grand old party as against 'national unity'.

Addressing the media just a few hours after the premier opposition party came out with a series of promises which it would implement should they come back to power, the Union Minister left no stones unturned in criticizing Congress for their promises.

He began his briefing by slamming the Congress party for their poor manifesto. Following that, he alleged that the promises in the manifesto were drafted by the 'friends of Congress party --Tukde-tukde gang', highlighting the grand old party's promise of removing sedition, a law which has become redundant, according to Congress.

"What they have said is that from the IPC (Indian Penal Code), sedition will be removed. Being an anti-national will no longer be a crime. The party which makes such announcements, it does not deserve even a single vote," said the Finance Minister in an all-out attack on Congress.

When the Congress released its manifesto on Tuesday, it announced a slew of measures, many related to farmers, jobs it would take after coming to power post the Lok Sabha 2019 polls. Though, there were a few controversial ones which concerned the national security, and one of the most debated announcement was that about the sedition law.

The grand old party promised to abolish the Section 124A of the Indian Penal Code, which amounts to sedition. 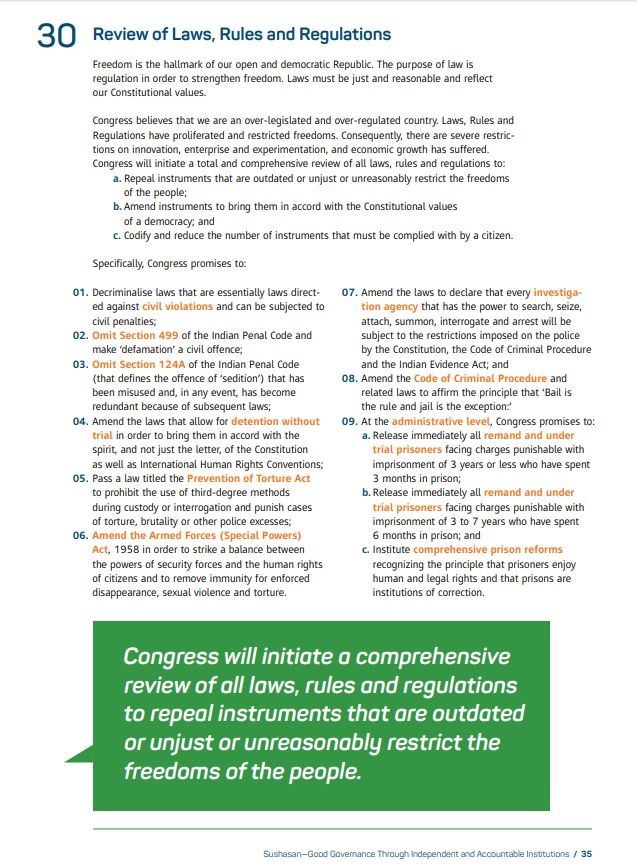 MUST READ: Congress Promises To Abolish 'Sedition' Law In Its Lok Sabha 2019 Manifesto

Just a few weeks ago, Republic TV was the first to learn that the party will take a stand against the sedition law. The Congress has time and time again spoken against the law, accusing the present government of misusing it on those who raise their voices against them.