In Jammu and Kasmir (J&K) which is currently under presidential rule after the BJP-PDP coalition state government fell, the battle is set between the NDA alliance, the UPA alliance which includes the Farooq Abdullah-led NC and the former BJP ally Mehbooba Mufti-led PDP for the 6 Lok Sabha seats up for grabs, which polled in the five phases of the Lok Sabha elections on April 11,18,23,29 and May 6.

In Jammu and Kashmir (J&K) which is currently under presidential rule after the BJP-PDP coalition state government fell, the battle is set between the NDA alliance, the UPA alliance which includes the Farooq Abdullah-led NC and the former BJP ally Mehbooba Mufti-led PDP for the 6 Lok Sabha seats up for grabs, which polled in the five phases of the Lok Sabha elections on April 11,18,23,29 and May 6. In the 2014 General elections, J&K had a voter turnout of 49.5% in all phases, in which the BJP won 3 seats, while the PDP won 3 seats and the UPA won no seat.
The last two Assembly elections (87 seats) are seen to follow an increasing trend for the BJP as it increased its win from 11 to 25 seats during 2014 riding on the Modi wave. While the voter turnout had increased marginally in 2014 from 61.2% to 66.4%, the Congress diminished its foothold as its seat share fell from 17 seats to 12 seats in 2014 as the saffron party formed an unlikely alliance with PDP to form the government. This alliance fell in June 2018 due to the increasing discrimination in the two regions of the state, the PDP's unresponsive attitude to aid and the PDP's hindrance to development projects in J&K. 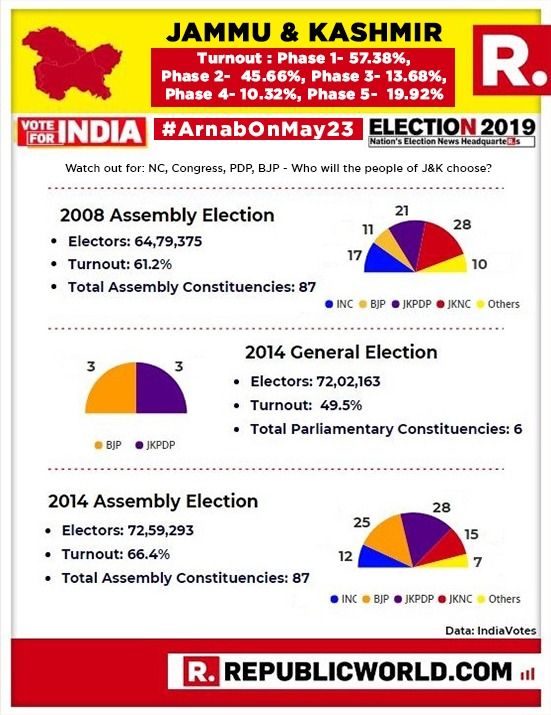 Anantnag: PDP's stronghold is home to major terror affected areas like Pulwama, Shopian, Kulgam and Anantnag. Here the battle is between PDP chief Mehbooba Mufti, BJP's Sofi Yousuf, NC's Hasnain Masoodi and the Congress' Ghulam Ahmad Mir. The constituency has also been very politically sensitive due to the killing of Burhan Wani. While many Kashmiri separatists have called for boycotting of polls, NC and PDP know that this favours the saffron party which has given free rein to the Indian Army pushing its agenda of nationalism.

National Approval Ratings: In Jammu And Kashmir, UPA Is Projected To Win The State, Leaving PDP And NDA On The Losing Side

The state has been under the scanner following the ghastly Pulwama attack, the issues of national security and BJP's stance of abrogating Article 370, which did not go down well with regional party leaders Omar Abdullah and Mehbooba Mufti.

After this former J&K Chief Minister Omar Abdullah called for 'separate Prime Minister and President for J&K', Mufti went ahead to say that the state will gain 'freedom' from India and went on the make a contrast between India-Jammu and Kashmir relations with that of Israel-Palestine over the abolishment of Article 370 from the state.

Both Mufti and Abdullah have also been very vocal on many controversies surrounding the BJP like - Sadhvi Pragya, Rajiv Gandhi, Prime Minister's comments on airstrike and other issues, Kamal Haasan's controversial remarks among a few.