Republic Double Exit Poll For Madhya Pradesh: NDA Projected To Bounce Back After Assembly Poll Setback By Both Jan Ki Baat And CVoter, UPA Projected For Alarming Slide Within Months Of Being On A High

In 2014, the BJP had recorded its best performance ever in the state, winning 27 of the 29 Lok Sabha seats in the state with a vote-share of 54%. The predictions from both CVoter and Jan Ki Baat show that NDA will win huge number of seats but will not achieve the kind of victory it did in 2014.

Sending 29 seats to the Lok Sabha, Madhya Pradesh is a state coveted by both Congress and BJP. The battle is likely to get highly interesting on account of the assembly election results, when the Congress overturned years of BJP rule to form a government in the state.

In 2014, the BJP had recorded its best performance ever in the state, winning 27 of the 29 Lok Sabha seats with a vote-share of 54%. The predictions from both CVoter and Jan Ki Baat show that NDA will win huge number of seats but will not achieve the kind of victory it did in 2014. #RepublicExitPoll | Projections for Madhya Pradesh are in, 24 seats projected for the NDA by Cvoter and 21-24 seats by Jan Ki Baat. 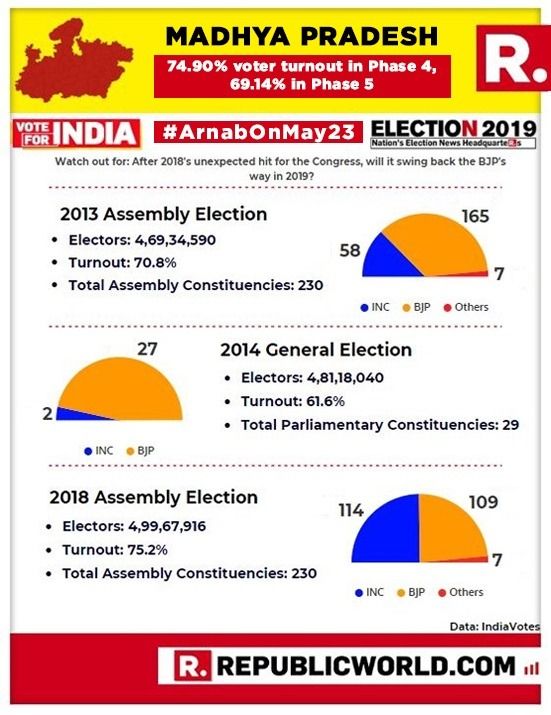 The battle for Madhya Pradesh:

The state was in the news as the Lok Sabha candidates from M.P made headlines for wrong reasons. Sadhvi Pragya, who is also the most controversial candidate from the BJP as she is accused in a terror case, made communal statements leading the Election Commission to ban her from campaigning on more than one occasion.