In Maharashtra, where the battle is set between the BJP-Shiv Sena (NDA) alliance and the Congress-NCP (UPA) alliance for the 48 Lok Sabha seats up for grabs which polled in the first four phases of the Lok Sabha elections on April 11,18,23 and 29.

In India's second-most electorally significant state Maharashtra where the battle is set between the BJP-Shiv Sena (NDA) alliance and the Congress-NCP (UPA) alliance for the 48 Lok Sabha seats up for grabs which polled in the first four phases of the Lok Sabha elections on April 11,18,23 and 29, here are the projections: 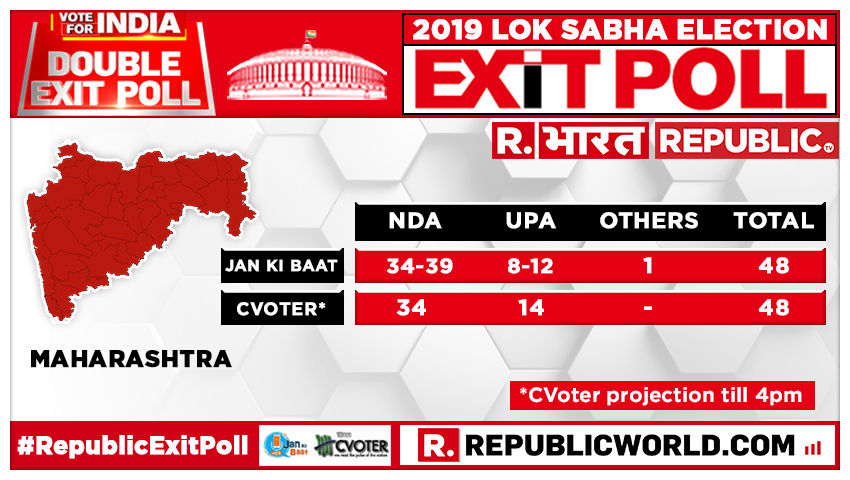 #RepublicExitPoll | Projections for Maharashtra are in, CVoter projects 34 seats for NDA and Jan Ki Baat projects 34-39 for NDA. Tune in to watch it LIVE here - https://t.co/LGCyJUEBn5 pic.twitter.com/CYu7xfQlYX

The last two Assembly elections (288 seats) are seen to follow an increasing trend for the NDA as it increased its win from 90 to 185 seats during the 2014 Modi wave. While the voter turnout had increased marginally in 2014 from 59.6% to 63.3%, the UPA faced a major loss as it diminished its seat share from 144 seats to 83 seats in 2014.
In 2019, Maharashtra has witnessed an average voter turnout of 61% in four poll phases. 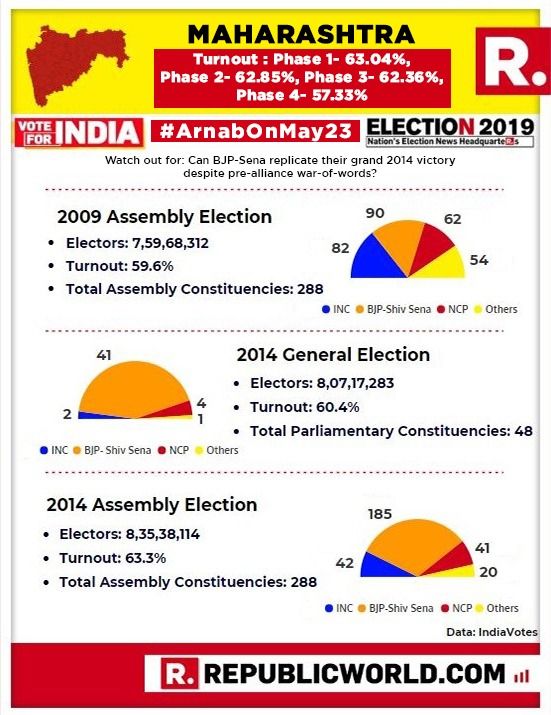 Nagpur: BJP's Nitin Gadkari faced Congress' Nana Patole who was once BJP's MP from Bhandar-Gondiya for the constituency in the first phase on April 11.

Ahmednagar: BJP's Sujay Vikhe Patil, son of former Leader of Opposition Radhakrishna Vikhe-Patil faced NCP MLA Sangram Jagtap and independent candidate SuvendraGandhi who is the son of sitting BJP MP Dilip Gandhi who was denied a ticket. The entire battle has become a prestige fight for the Vikh-Patil family and the Pawar family.

Ratnagiri: The coastal belt seat saw a battle between Shiv Sena's Vinayak Raut and Nilesh Rane who belongs to the Narayan Rane-led Maharashtra Swabhimaan Paksh and Congress' controversial candidate Navinchandra Bandivadekar. While Shiv Sena won in 2014, it is said to be on a backfoot due to job issues plaguing the fisherman community.

Ally Shiv Sena Takes On BJP For 'Bhrashtachar No. 1' Reference To Rajiv Gandhi, Calls It 'condemnable'

While initially BJP and Uddhav Thackeray-led Shiv Sena were at daggers over numerous issues, and their alliance, which has run for over two decades was speculated to be at an end despite the parties being in government at the Centre, the state, and also in the BMC, the parties settled for a seat share with BJP contesting from 25 and Shiv Sena from 23 seats.
The Congress faced a major shift in state leadership when former Leader of Opposition Radhakrishna Vikhe-Patil quit the Congress after his son Sujay joined the BJP. NCP chief too had declared that he would not contest which has earned many jibes from PM Modi and Uddhav Thackrey as rumours of a rift in the Pawar family had emerged. The other development was that MNS chief Raj Thackrey too opt out of the contest while openly campaigning for the Congress.

Meanwhile, Shiv Sena rival, NCP Chief too claimed that in a presentation while he cast his vote for NCP, the vote allegedly went to the lotus.
The state which is currently experiencing extreme drought had to wait till the conclusion of the polls for the Maharashtra government to begin work under the Employment Guarantee Scheme (EGS) in the drought-affected areas after EC green flagged the move as the model code of conduct (MCC) was not applicable to drought-relief work.