As the 39 days of a rousing elections officially comes to conclusion with the seventh and the last phase of voting on Sunday, the attention is now fixated on the result day on May 23 that will seal the fate of candidates in fray across thousands of polling booths in 542 constituencies in a country of over 900 million eligible voters. However, before the moment of truth that will determine the composite of the 17th Lok Sabha elections and from there the formation of a new Indian government, the Republic Media Network has broadcast India's biggest exit poll - the mega double exit poll in collaboration with the country's top pollsters Jan Ki Baat and CVoter.

In tune with the election fervour, Republic Media Network brings two mega polls after conducting a comprehensive survey across the country following each of the seven phases of the 2019 polls. The double Republic Exit Poll features a projection of how the seat-shares and vote-shares could turn out for each of the states and union territories of India, and put together, project whether the BJP and NDA will be able to retain their power and conversely, whether the Congress, UPA will be able to fight back after reaching a historic low in 2014. 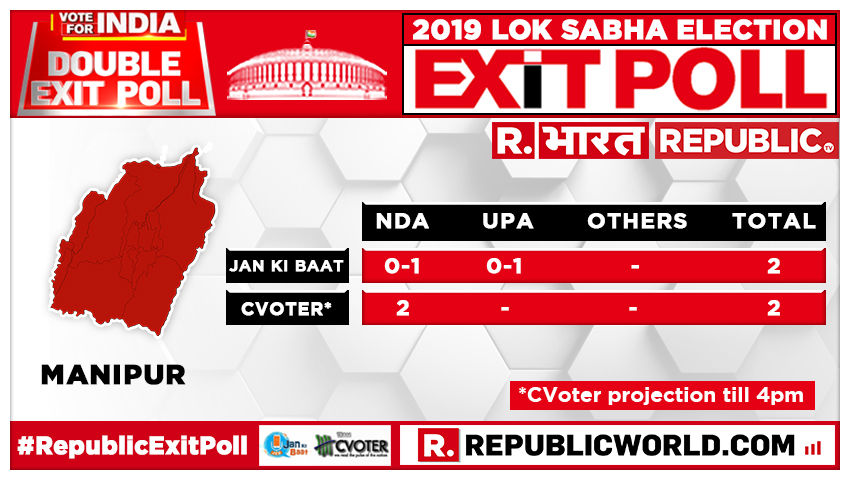 According to the CVoter predictions, the verdict from Lok Sabha 2014 is projected to change in favor of BJP who are projected to grab both the seats of this north-eastern state. While Jan Ki Baat has predicted 0-1 seat for both BJP and Congress.

In the North-eastern state of Manipur, out of the 2 Lok Sabha seats, one is reserved for scheduled tribes and in 2014 the state elected Congress on both the seats.

The state went to polls in two phases on April 11 and 18. 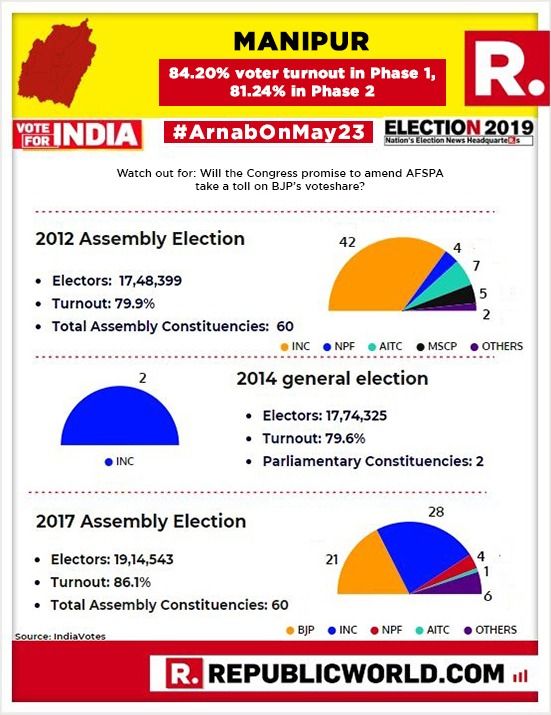 PEOPLE HAVE PLEDGED SO FAR
Lok Sabha Elections 2019 | Voting dates in Manipur: Here's when you can vote in Manipur for each constituency and phase
National Approval Ratings: In Manipur, NDA and UPA likely to indulge in a tug of war as both projected to acquire one seat each
2019 Lok Sabha Election Results for Manipur: NDA bags one of the two seats, UPA nil
DO NOT MISS
TRUMP & MUKESH AMBANI INTERACT
AAP VISITS RAJGHAT; PRAY FOR PEACE
AJIT PAWAR: GOVT JUST 2 MONTHS OLD
AFFIDAVIT IN SC ON DELHI VIOLENCE
IVANKA PICKS INDIAN DESIGNER
SAMI'S 3 PRO-NAMASTE TRUMP REASONS