In Meghalaya, the battle is set between the NDA alliance and the UPA alliance for the 2 Lok Sabha seats up for grabs, which polled in a single poll phase of the Lok Sabha elections on April 11.

In Meghalaya, the battle is set between the NDA alliance and the UPA alliance for the 2 Lok Sabha seats up for grabs, which polled in a single poll phase of the Lok Sabha elections on April 11. 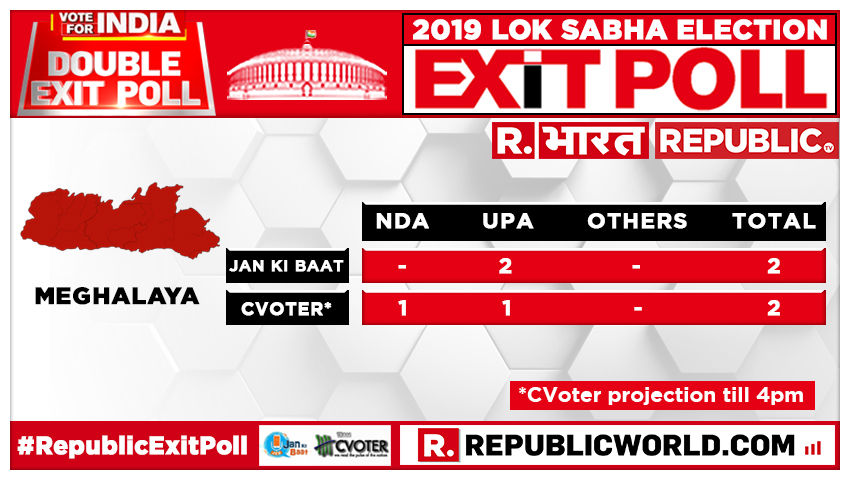 In terms of seats, the NDA and UPA are each predicted to win 1 seat.
NDA: 1 seat
UPA: 1 seat

In the 2014 General elections, Meghalaya had a voter turnout of 68.8% in all phases, in which the NDA ally -NPP which is a part of the North East Regional Political Front (NPEP) won 1 seat, while the UPA won 1 seat.

The last two Assembly elections (60 seats) are seen to follow an increasing trend for the NPP as it increased its win from 2 to 19 seats during 2018 under the leadership of the Conrad Sangma-led NPP. In a jolt to Congress, the Meghalaya governor had called NPP to form the government as both UPA and NDA had 21 seats each. While the voter turnout remained constant at 87.7%, the Congress diminished its foothold as its seat share fell from 29 seats to 21 seats in 2018 as the saffron party formed an alliance with NPEP to form the government. 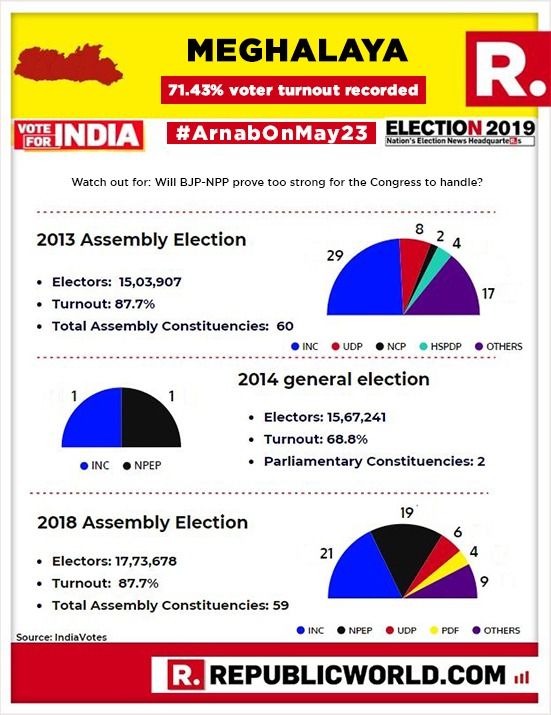 Shillong: The battle centers around the key issue of Mining as many mishaps regarding mining have occurred in the state. BJP's Sanbor Shullai will face Congress' Vincent H Pala and UDP's Jemino Mawthoh.

In January, the state was under major fire when the National Green Tribunal imposed a fine of whopping Rs 100 crore on the Meghalaya government for failing to curb illegal coal mining in the state after the incident where at least 15 miners were trapped in the 370 foot-deep illegal coal mine in Lumthari village of East Jaintia Hills district of Meghalaya since December 13 and all efforts to pump the water out of flooded mine have been in vain.