The Congress Party on Monday has released its third list of 6 candidates for 2019 Lok Sabha elections.

The Congress Party on Monday has released its list of 6 candidates for 2019 Lok Sabha elections. The Congress high command gave a final go ahead and selected the following candidates to for ensuing elections to the Lok Sabha from NCT of Delhi:

However, Kapil Sibal's name is missing from the list. The Congress leader has earlier said whether or not there would be a Congree-AAP alliance, he would contest from Chandni Chowk which he had represented earlier. He is currently a Rajya Sabha MP from Uttar Pradesh. 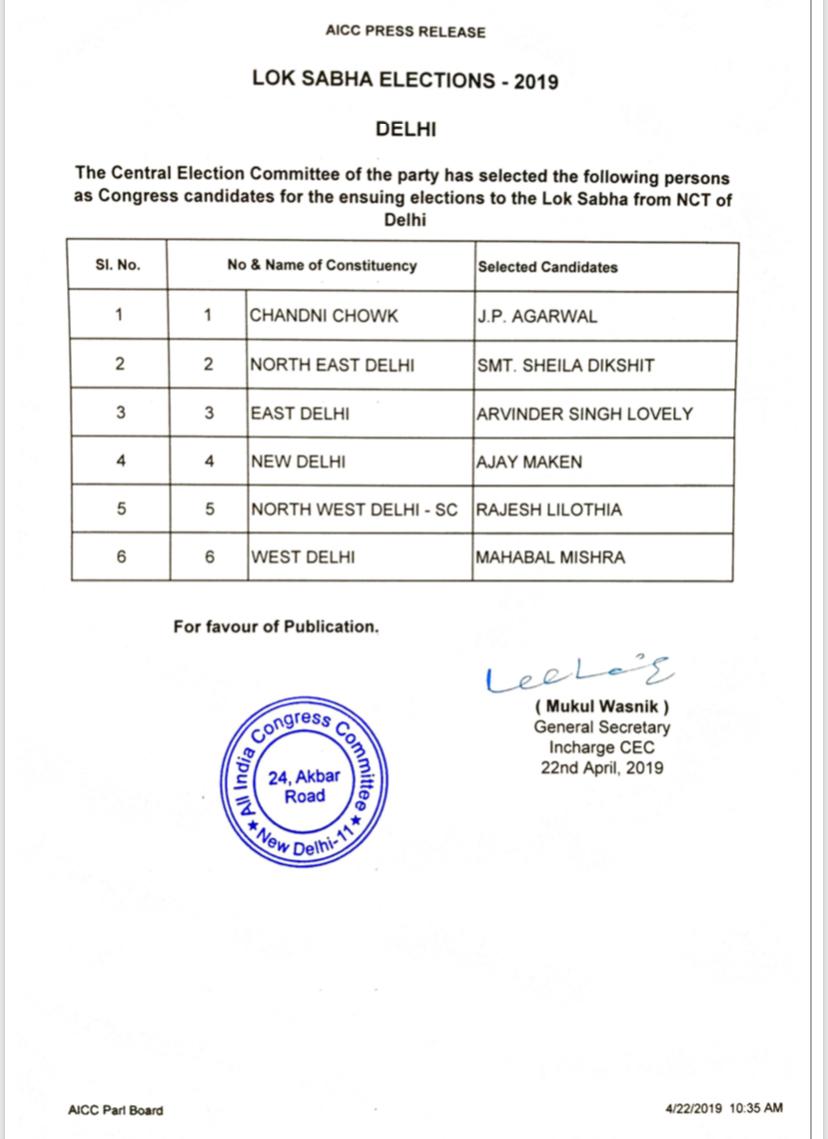 WATCH: Stung BJP MP Harinarayan Rajbhar Hurls Abuses After Republic Bharat Confronts Him Over The Contents Of The Sting

Earlier, the BJP released its 23rd candidate list for the 2019 Lok Sabha elections on Sunday where it announced seven members whom it is fielding from constituencies across Delhi, Punjab, Uttar Pradesh and Madhya Pradesh.

Among those in the list include Union Ministers Dr Harsh Vardhan who has been given the ticket to fight from Chandni Chowk, and Hardeep Singh Puri will contest from Amritsar, and actor-turned-politician Manoj Tiwari who will be fighting the polls from North East Delhi.

Another notable mention in the list is Harinarayan Rajbhar who was caught in a sting by Republic Media Network where he sought favours in-kind from the Republic Bharat reporter instead of asking for cash directly. Rajbhar has been given a ticket to fight from Ghosi in Uttar Pradesh.

PEOPLE HAVE PLEDGED SO FAR
Transgenders excited to cast vote first time under gender identity of their choice
'Took a quick break and came to Delhi for this': Sidharth Malhotra casts his vote as India goes to polls for Phase 6 of General Elections 2019
"AAP opened door for PM Modi, does not have courage to say 'Chowkidar Chor hai'," says Rahul Gandhi during Delhi rally
'Will hang myself in public if AAP proves anything against me in pamphlet filth': Gautam Gambhir issues third and biggest challenge to Arvind Kejriwal
'Shocked' VVS Laxman backs Gautam Gambhir over charges of circulating derogatory pamphlets on election opponent Atishi Marlena. Here's what he said
DO NOT MISS
MHA EXPLAINS BRITISH MP'S DEPORT
ANOTHER JAMIA VIDEO EMERGES
OWAISI: 'FIR AGAINST DELHI COPS'
MASOOD AZHAR GOES 'MISSING'
IPL 2020: MUMBAI INDIANS FIXTURES
THEATRE COMMAND STRUCTURE IN INDIA