The BJP on Monday released its 24th list for the Parliamentary elections naming two candidates from NCT of Delhi.

The BJP on Monday released its 24th list for the Parliamentary elections naming two candidates from NCT of Delhi. 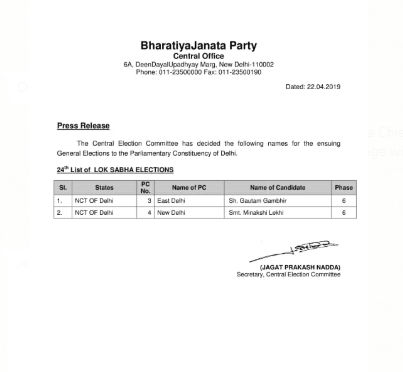 Right after a shift in career from cricket to politics, the BJP entrant stoked controversy by engaging in a twitter spat between two leaders of the prominent parties in Jammu and Kashmir- NC's Omar Abdullah and PDP chief Mehbooba Mufti over the abrogation of Section 370 and Section 35A from the Constitution.

Meanwhile, BJP MP Meenakshi Lekhi recently came to light after filing a contempt plea against Rahul Gandhi wherein he admitted in the Supreme Court that he made the statements over his allegations in the Rafale case in the “heat of political campaigning”

Earlier, the BJP released its 23rd candidate list for the 2019 Lok Sabha elections on Sunday where it announced seven members whom it is fielding from constituencies across Delhi, Punjab, Uttar Pradesh and Madhya Pradesh.

Among those in the list include Union Ministers Dr Harsh Vardhan who has been given the ticket to fight from Chandni Chowk, and Hardeep Singh Puri will contest from Amritsar, and actor-turned-politician Manoj Tiwari who will be fighting the polls from North East Delhi.