In the 2019 Lok Sabha polls, polling for 21 Lok Sabha constituencies and 147 assembly was held simultaneously in Odisha in four phases on April 11, 19, 23 and 29. In 2019, Odisha witnessed a major competition between Prime Minister Narendra Modi and Chief Minister Naveen Patnaik addressing multiple rallies across the state. With PM as the face of BJP, a considerable vote-share saw a drift to the saffron party, while Congress was nowhere to be seen in Odisha this election. Odisha witnessed a three-cornered fight this election season with BJD-led Naveen Patnaik who is running for the chief ministership for the fifth time in a row, the BJP under the guidance of Union minister Dharmendra Pradhan and the Congress under state unit president Niranjan Patnaik.

Here are the projections for Odisha:

As per CVoter projections, a neck-to-neck competition between BJP-led NDA and current CM Naveen Patnaik-led BJD is projected in Odisha as the Narendra Modi-led saffron party makes inroads into BJD's bastion with 10 and 11 seat-share respectively. BJD's projection at 11 is 9 seats less than what the party got in the 2014 polls, which was a massive 20 Lok Sabha seats, leaving just one to the BJP. UPA is predicted to left far behind with 0 mark, which is similar to its seat-share in the 2014 General Elections.  CVoter predicts voteshare of 30.2 percent of votes for NDA, while UPA is projected to win 20 vote-share in the 2019 polls. BJD is projected to gain big in vote-share with 33.1 percent of votes. 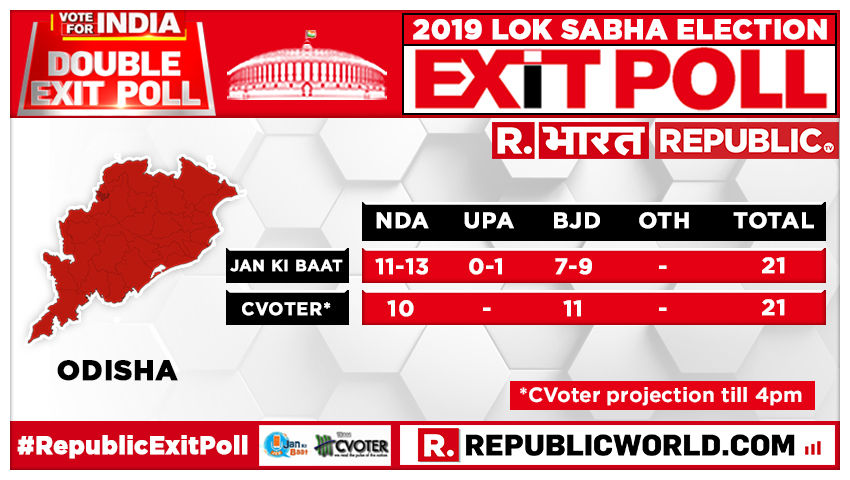 #RepublicExitPoll | The projections for Odisha are in, CVoter gives 11 seats to the BJD and Jan Ki Baat gives 11-13 seats to NDA. Tune in to watch it LIVE here - https://t.co/LGCyJUEBn5 pic.twitter.com/RPAVOCtmuU

In 2014 Lok Sabha elections, the BJD massively swept 20 Lok Sabha seats leaving just one to the BJP, as the grand old party drew a blank. As per vote-share in 2014, BJD had won 44.10%, BJP had managed to grab 21.50% and Congress won 26% vote-share. In 2009, the BJD had won 103 Assembly and 14 Lok Sabha seats, with the Congress contributing six Lok Sabha constituencies to the UPA-II government.

Here's how Odisha voted in the last three elections in the state: 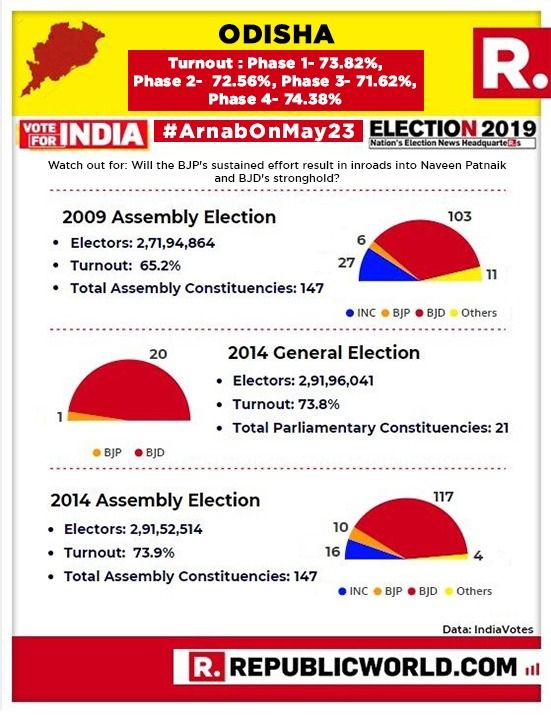