WATCH: Kirron Kher’s ‘young Friend’ Anil Kapoor Shares An Interesting Anecdote From 5 Years Ago As He Gives An Energetic Pitch To Vote For The BJP Leader

After over 25 films together, Anil Kapoor and Anupam Kher’s bond goes much beyond their decades-long professional collaboration. WATCH | Kirron Kher’s ‘young friend’ Anil Kapoor shares an interesting anecdote from five years ago as he gives an energetic pitch to vote for the BJP leader.

After over 25 films together, Anil Kapoor and Anupam Kher’s bond goes much beyond their decades-long professional collaboration. However, the former is not just very good friends with the veteran, but also his wife, actor-politician Kirron Kher. As the sitting Member of Parliament representing Bharatiya Janata Party (BJP) from Chandigarh gears up to contest again for the Lok Sabha elections, Anil gave the most energetic pitch for the politician, by praising her 'hard work and honesty'. Sharing how she refused his film offer so that it doesn’t divert her attention for Chandigarh,  the ‘Judaai’ star urged to vote for her as, according to him, the citizens of Chandigarh 'can’t get a better MP’ than Kirron.

READ: ON THE ROAD: "I Am A Daughter Of Chandigarh, Straight, Transparent And Direct," Says BJP's Kirron Kher On Her Political Journey

In a video posted by Kirron on Twitter, Anil can be heard saying, “Kirron Kher is my friend. I know her since 35 years. And whatever Kirron has done till today, she’s done it with hard work, honesty and intensity. Five years ago, she was fighting the elections from Chandigarh, I had even come to canvas for her. 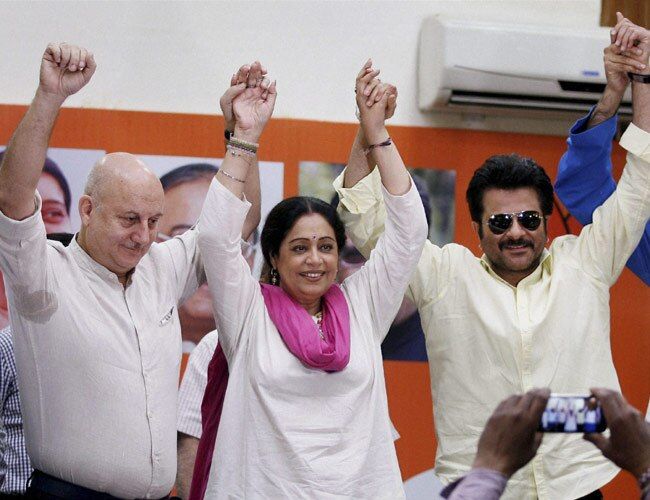 "I felt extremely happy when you all made her win with love. During that phase, I even offered her a film, but Kirron said, “Bhaiyaa Anil, I can’t do any film now; my full concentration is on the people of Chandigarh.' Five years later, she’s contesting again, and I wish that you all make Kirron Kher win again because you can’t get a better MP than her from Chandigarh. Vote for Kirron Kher! Jai Hind!”

Kirron thanked her ‘young friend’ for taking time off his busy shooting schedule to convey his best wishes. Watch the video here:

I'm so inspired by these icons who have committed their lives to working hard & striving for mental & physical strength each day...Their faces & body language reflect the inner poise and peace that comes with such discipline!@narendramodi @PMOIndia @akshaykumar https://t.co/BTX6is4a6b

Earlier, Anupam Kher too had campaigned for Kirron and expressed confidence about people voting for Bharatiya Janata Party.

Kirron Kher is the sitting Member of Parliament from Chandigarh after she beat Pawan Kumar Bansal in 2014. The actor-politician is pitted against the Congress leader once again. Aam Aadmi Party, meanwhile, has replaced 2014 candidate Gul Panag with Harmohan Dhawan. Chandigarh goes to polls in the seventh and last phase of the Lok Sabha elections on May 19.