Rajasthan went into polls for 199 out of 200 assembly seats on December 7, while recording a voter turnout of 74.21 percent. To tackle the ruling BJP government, Congress party has made multiple promises in its election manifesto named Jan Ghoshna Patra in Rajasthan.

Rajasthan went into polls for 199 out of 200 assembly seats on December 7, while recording a voter turnout of 74.21 percent. With Congress aiming to topple the BJP-led Vasundhara Raje government in the state, the party has made multiple promises in its election manifesto in the state. The Congress manifesto, titled Jan Ghoshna Patra, was prepared after crowdsourcing inputs from 2 lakh respondents.

Here are the highlights of the Congress manifesto:

Waiving off farm loans in 10 days of coming to power

The Congress has promised to waive off the farm loans within 10 days of coming into power.

Free equipment from GST for farmers

Rajasthan Congress chief Sachin Pilot has stated that he will ensure a pension for elderly farmers and make sure that all farming equipment free from GST, adding that the party will recommend the GST Council to include petrol and diesel under the ambit of the tax if voted to power. Moreover, a manifesto implementation committee will also be constituted by the party to ensure that all factors mentioned in 'Jan Ghoshna Patra' are implemented.

Free education in government facilities for all women

Capitalising on the above 70% turnout of women in this election, Congress leader Sachin Pilot has promised free education in government schools and universities for all women across all categories.

Like the BJP's promise to extend a monthly stipend of Rs. 5000 to the unemployed youth, Sachin Pilot has guaranteed the educated unemployed youth for a stipend of up to Rs. 3,500 every month. It also promises to provide loans to such youths at concessional rates.

In a bid to ‘open up’ the democratic system, the Congress, in its Rajasthan Manifesto, has promised that it will remove the condition of minimum qualification required to contest Panchayati Raj elections. This has come in the wake to counter the Rajasthan Panchayati Raj Amendment Law of 2015 that the BJP introduced which mandates candidates to have passed class 10 for Panchayat polls and class 7 in sarpanch elections.

Vedic Sanskar and Shiksha Board promise

In a big to counter the BJP’s promise of bringing a Vedic Studies Board, the Congress countered it by promising a Vedic Sanskar and Siksha Board to woo the electorate in this Hindi-speaking state.

In Rajasthan, where elections were held on Friday for 199 seats, history says that the incumbent, i.e. the BJP and CM Vasundhara Raje, will be voted out of power. On this, all exit polls are unanimous.

The Congress has also projected great confidence that they will be forming a majority government in the state and all the exit polls, apart from Jan Ki Baat, are also unanimous on this, despite the Rahul Gandhi-led party not stating outright whether Sachin Pilot or Ashok Gehlot (or someone else) is its Chief Ministerial candidate.

Here are numbers of poll of exit polls in Rajasthan: 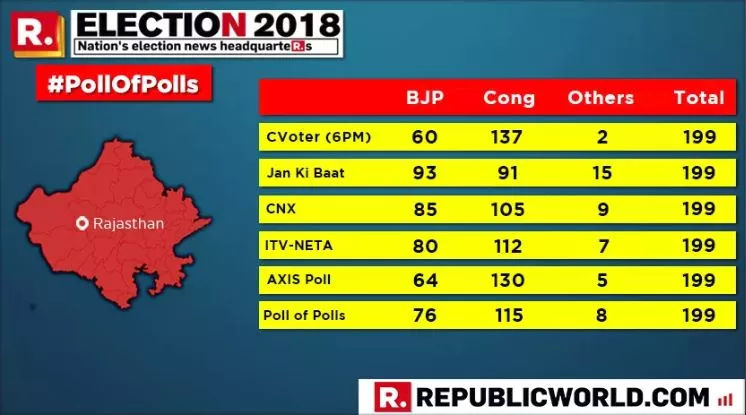