Union Minister Gajendra Singh Shekhawat has been sent a notice by the Election Commission for his threatening comments against the officials of the poll body.

Union Minister Gajendra Singh Shekhawat has been sent a notice by the Election Commission for his threatening comments against the officials of the poll body. The BJP's Jodhpur candidate for the Lok Sabha elections has been asked to explain his comments in Jaisalmer where he threatened the EC officials that he would hang them upside down once his party would come to power in the state.

"This is not the last election. I have details of all officials. The government would change after five years. I would hang all of them upside down then," Shekhawat has said on Sunday as per the camera recording.

The EC has said that the comments of the MoS for Agriculture and Farmers Welfare is in violation of Model Code of Conduct. The poll body has given him two days to reply to the notice.

Read the Election Commission's notice to Shekhawat below: 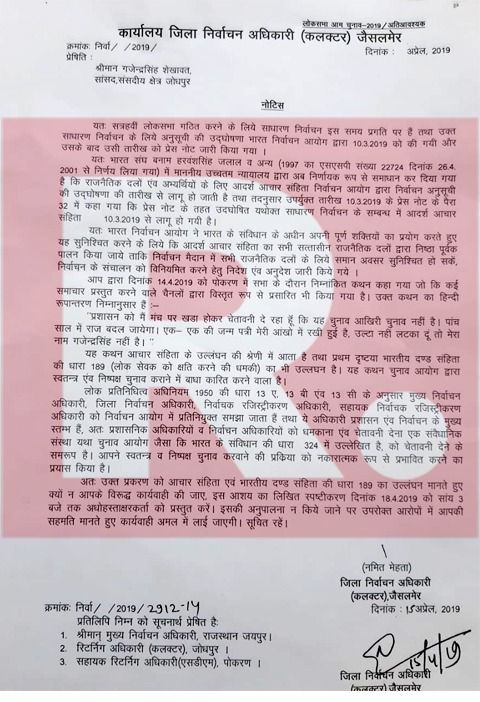 The Union Minister was angered after his vehicles were videographed by the officials to tally expenditure on Sunday. In the comment which has been recorded on camera, he is seen saying that he has details of the officials who carried the action and threatened action against them once his party came to power

The videography was carried following a notice from the sub-divisional magistrate stating that the expenditure on vehicles used by Shekhawat in the meeting would be added to his total campaign cost. A complaint has been lodged against Shekhawat with the District Election Officer by NSUI leader Sunil Chaudhary over his alleged threat.

"Desperation of the BJP candidate was evident by his threat. It showed the BJP doesn't believe in democracy," Chaudhary said.

ADM Madan Lal Nehra confirmed receipt of the complaint and said it is being processed.