With just days to go for the first phase of the 2019 Lok Sabha polls, Republic TV and CVoter have published the National Approval Ratings  - the biggest opinion poll ahead of the all-important elections.

With just days to go for the first phase of the 2019 Lok Sabha polls, Republic TV and CVoter have published the National Approval Ratings  - the biggest opinion poll ahead of the all-important elections.

In Tamil Nadu, the situation is fluid, with the two biggest leaders the state has seen in recent years - Jayalalithaa and Karunanidhi - having passed away since the 2014 elections in which the AIADMK had emerged not only the biggest party in the state by a wide margin, but also the third-biggest party in the country. The party also won the assembly elections, but now, the alliance between the DMK and the Congress presents a big threat to the AIADMK-BJP alliance.

With 39 seats in the state, here is the projection for the state of Tamil Nadu: 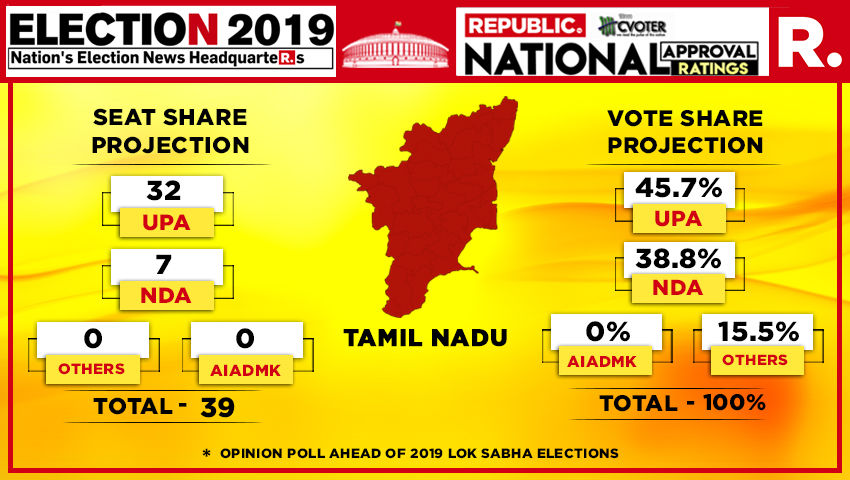 READ: KTR Gives A Thumbs Up To Republic TV-CVoter's National Approval Rating For Telangana; Owaisi Concurs With The TRS Leader

In terms of seat share, Congress-DMK alliance is projected to dominate with 32 seats, while the NDA is projected to win just 7 seats. This is also evident in the vote-share. The UPA is projected to be the biggest winner with 45.7% of the vote while NDA follows with a difference of almost 7% - 38.8%. As far as the other parties are concerned, their vote share may be divided into the 15.5% bracket.

This time, the electoral battle in Tamil Nadu is crucial for the ruling AIADMK and the principal opposition DMK for reasons that go beyond a wish to wield influence with the next government at the Centre. After the deaths of their biggest leaders, this will also be the first time that Tamil Nadu will go into the 2019 Lok Sabha elections without having any larger-than-life figure in the fray. In 2014, the AIADMK had won 37 seats.

Polling for the 39 Lok Sabha seats and by-elections for 18 Assembly seats will be held simultaneously in the state on April 18.