As the 39 days of a rousing elections officially comes to conclusion with the seventh and the last phase of voting on Sunday, the attention is now fixated on the result day on May 23 that will seal the fate of candidates in fray across thousands of polling booths in 542 constituencies in a country of over 900 million eligible voters. However, before the moment of truth that will determine the composite of the 17th Lok Sabha elections and from there the formation of a new Indian government, the Republic Media Network has broadcast India's biggest exit poll - the mega double exit poll in collaboration with the country's top pollsters Jan Ki Baat and CVoter.

In tune with election fervour, Republic Media Network brings two mega polls after conducting a comprehensive survey across the country following each of the seven phases of the 2019 polls. The double Republic Exit Poll features a projection of how the seat-shares and vote-shares could turn out for each of the states and union territories of India, and put together, project whether the BJP and NDA will be able to retain their power and conversely, whether the Congress, UPA will be able to fight back after reaching a historic low in 2014.

In this election season, India's most electorally significant state Uttar Pradesh found a crucial spot in political discourse with arch enemies BSP-SP allying together, controversies of lewd remarks by SP's Azam Khan, politics of polarisation by leaders like CM Yogi Adityanath and Union Minister Maneka Gandhi, key battles of bastions and induction of a Gandhi sibling, Priyanka Vadra as the AICC General Secretary for East UP.

Here are the projections for the 2019 Lok Sabha elections in Uttar Pradesh: 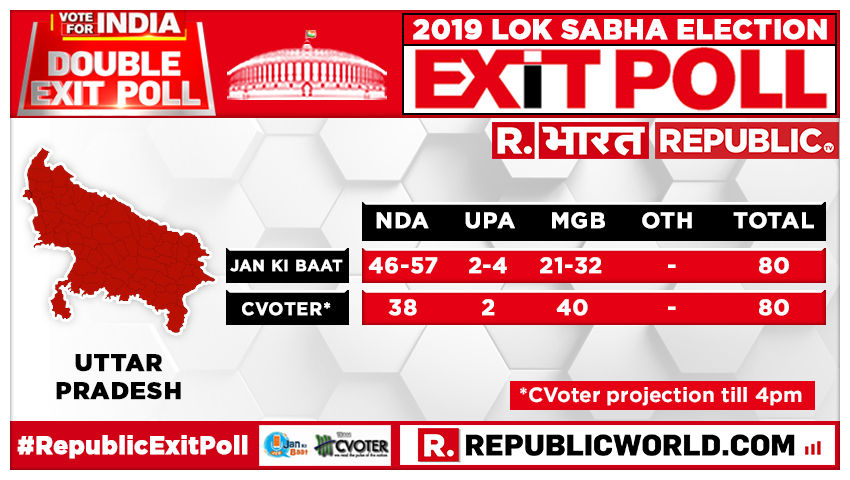 In 2014, BJP led NDA secured a massive majority of 73 out of 80 seats in the state, and out of the seven remaining seats, two were won by Sonia Gandhi and Rahul Gandhi at Rae Bareli and Amethi respectively, while the five others were won by the Yadav dynasty in the state. Compared to 2014 Parliamentary elections, in 2019 the BJP seat-share is predicted to go down by over 10 seats, which will benefit the SP-BSP Mahagathbandhan. 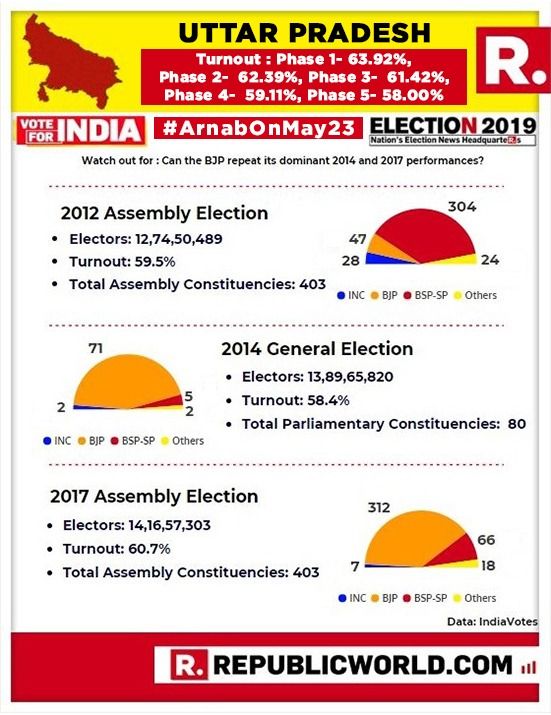