Bismillah has written a letter to the Prime Minister stating that he wishes to be a part of the team when he files his nomination for the Lok Sabha polls at Varanasi. In 2014, the family had declined the offer of BJP to be a part of the nomination process saying that they did not want to be associated with any political party.

Bismillah’s letter which has been accessed by Republic TV read:

“I, Nasir Abbas Bismillah, grandson of Bharat Ratna (late) Ustad Bismillah Khan humbly request you that when you file for nomination to contest in the Lok Sabha from our city Varanasi, I wish to be present with you during the same. This will be a very memorable and well-wishing message for us. I would like to remind you that a year ago, I had donated a shehnai on which my grandfather used to play his tunes, which was then handed over by you to the Varanasi Trade Facilitation Centre and Craft Museum where it is on display. I not only hope but also believe that you will definitely invite us to your nomination ceremony.” 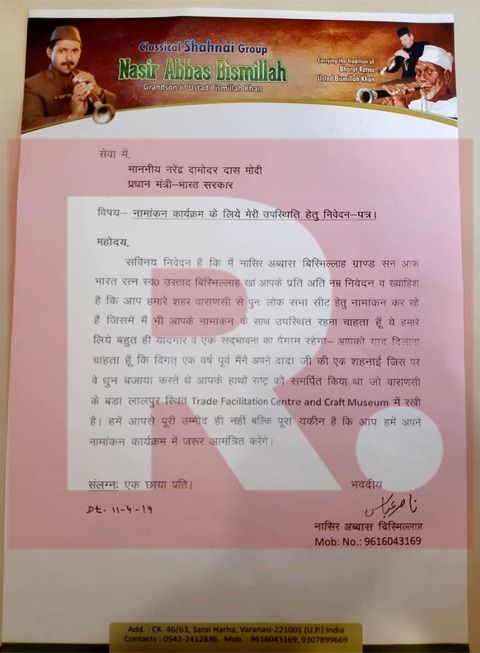 Speaking exclusively to Republic TV, Bismillah has expressed remorse for not backing PM Modi’s nomination in 2014 on the word of some local Congress leaders.

“In 2014, we were simple people with no knowledge about the politics in the world. We still don’t. We are musicians involved in creating melodies. But some people from the local Congress wing had come to our house and told us to do as per their instructions. And following them, my family had rejected the invitation from a great leader like PM Modi. We have this great remorse that on Congress’ word, elders in our family did this. We regret insulting the great honour given to us by PM Modi.”, said Bismillah.

Describing how his family’s innocence was misused by the Congress, he said:

“Local Congress leaders who have known our family brainwashed the elders in the family and told them to do according to their wishes. These leaders are close to our family since my grandfather’s times, and hence I do not wish to reveal their names.”

PM Modi is set to file for nomination at Varanasi on April 26, 2019. Varanasi is set to go to polls on May 19. The 2019 Lok Sabha Elections will be held from April 11 to May 19 in seven phases, with the counting of votes scheduled for May 23. The results of the Lok Sabha polls will also be declared on May 23.