Uttarakhand has 5 Lok Sabha Constituencies in total. All the constituencies voted in 2019 General Elections during the first phase of polling on April 11. During 2014 Lok Sabha Elections, the state elected BJP candidates from all its 5 constituencies, giving them an overwhelming victory. Will BJP continue it's winning streak even in 2019?

Here are the projections for the state of Uttarakhand: 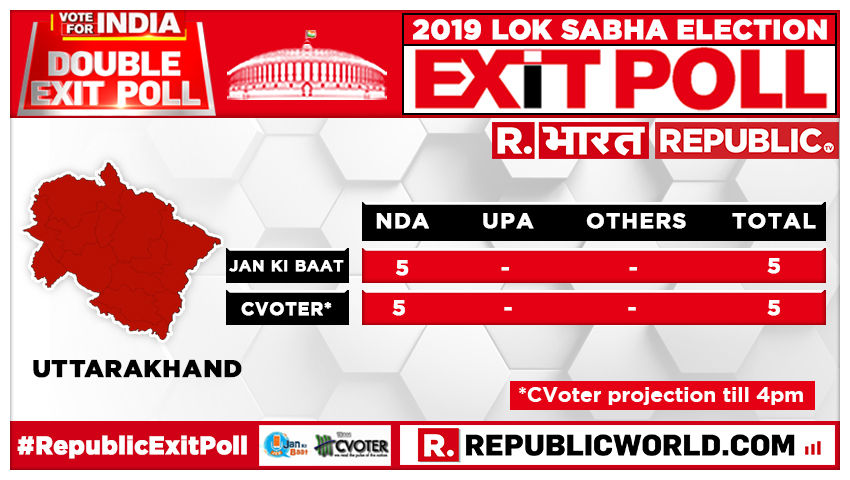 Now, as per the predicted figure, it is clear that NDA will continue to have its stronghold in the state. It is projected that NDA will all the five parliamentary seat in the state whereas UPA will be left empty-handed.

According to Jan Ki Baat projection, the picture is similar to the C-Voter prediction. NDA is likely to sweep the 2019 Lok Sabha Elections with a clear majority.

Here's how Uttarakhand voted in the last three elections in the state:

A voter turnout of 61.50 percent was recorded in Uttarakhand which went to polls in the first phase of Lok Sabha elections. According to final polling percentage released by the Election Commission after collating data received from remote corners of the hill state, a total of 61.50 percent of the 78.56 lakh voters exercised their franchise on the polling day. The final polling percentage in Uttarakhand released by the poll body is only slightly lower than 61.67 percent voter turnout recorded in the 2014 Lok Sabha polls. Giving the break-up of the final polling percentage on all the five seats of the state, the commission said Haridwar recorded the highest turnout of 68.92 percent followed by Nainital which recorded a turnout 68.69 percent. 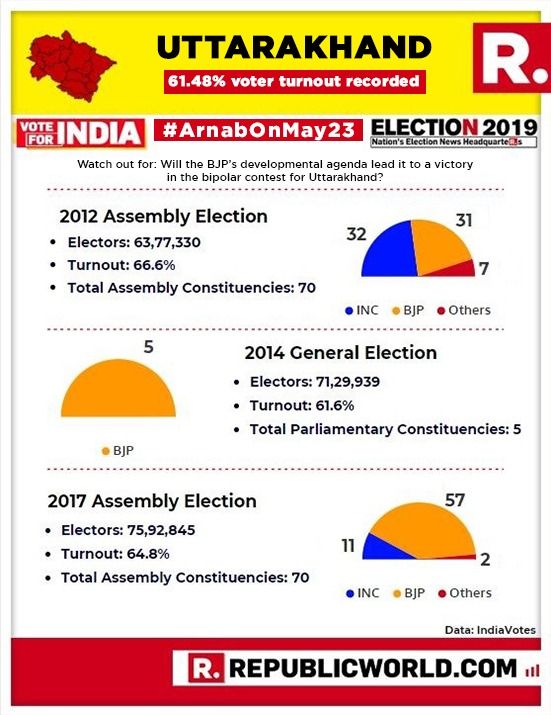 PEOPLE HAVE PLEDGED SO FAR
2019 Lok Sabha results in Uttarakhand: BJP sweeps the state winning all 5 seats
Lok Sabha polls 2019: PM Modi to address rally in Uttarakhand on March 28
MUST WATCH: 'On The Road' With Hema Malini, as she speaks about her discipline and her works in Mathura
DO NOT MISS
CONGRESS: IS TRUMP LORD RAM?
MAJOR DEFENCE ACQUISITION APPROVED
KATIE HOPKINS LAUDS 'MODI & INDIA'
PHOTOGRAPHER CAPTURES DANCING BEARS
ANUSHKA & KATRINA'S RESEMBLING LOOK
KOHLI ON WORKLOAD