Controversial former Kolkata CP Rajeev Kumar has missed his 10 am in-time at the Ministry of Home Affairs in New Delhi on Thursday after being transferred by the Election Commission a day earlier.

Controversial former Kolkata CP Rajeev Kumar has allegedly missed his 10 am in-time at the Ministry of Home Affairs in New Delhi on Thursday after being transferred by the Election Commission a day earlier.

As per Home Ministry sources, Kumar has allegedly neither showed up for duty, nor has he given any intimation or explanation over his no-show.

Kumar, who was embroiled in an enormous controversy and was at the very eye of the storm as the CBI faced off against the Kolkata Police in February, was on Wednesday evening relieved of his posting as ADG (CID) West Bengal by the Election Commission as part of the briefing where the Phase 7 election campaign in the state was cut short by 24 hours on account of the violence that has been witnessed there in each of the phases thus far as well as on Tuesday as clashes broke out at Amit Shah's poll rally.

The Election Commission had explicitly ordered Rajeev Kumar to report at the MHA in New Delhi at 10 am on Thursday. 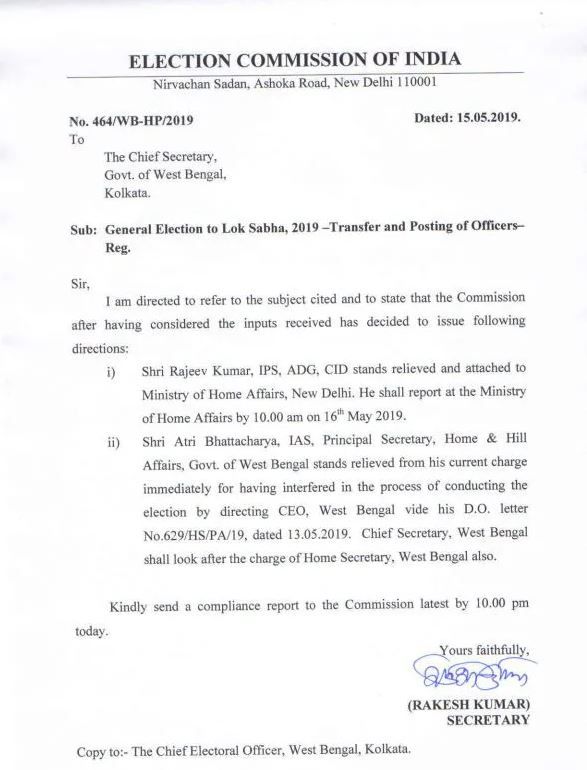 Following the EC's big decision, Mamata Banerjee had held a press briefing where she had attacked the poll body, accusing it of acting at the behest of PM Modi and Amit Shah.

It was over Rajeev Kumar, then Kolkata's CP, that the CBI and the Kolkata police had clashed in a dramatic late-night face-off in February, following which West Bengal CM Mamata Banerjee had held a days-long dharna against the Centre which she ended on the insistence of Andhra Pradesh counterpart Chandrababu Naidu. Rajeev Kumar had sat on the dharna with Banerjee - as had other top officers from the state, many of whom subsequently had their decorations withdrawn for taking political sides.

Following that, and subsequent to a Supreme Court order, Rajeev Kumar was questioned by the CBI in connection with the multi-crore Saradha chit fund scam which he had investigated before it was given to the central agency.

Just over a month earlier, the CBI filed a fresh plea in the Supreme Court seeking permission to arrest Rajeev Kumar, seen as a Mamata loyalist, in connection with the Saradha case. The probe agency mentioned that the custodial interrogation of Kumar was required to unravel the conspiracy and nexus between directors of Saradha Group and the politicians related to the case.