The projection for West Bengal:

The newsmaker of the 2019 Lok Sabha polls, violence including crude bombs, lathicharges and repeated political clashes and claims of attacks from candidates became the talking point in West Bengal as polling was held in all seven phases in the politically important state. The BJP has left no stone unturned in attempting to make inroads into Mamata Banerjee's bastion while the Trinamool has responded by not ceding an inch. However, it appears that the BJP's efforts have paid off as the party is projected to win a significant number of seats in the state: 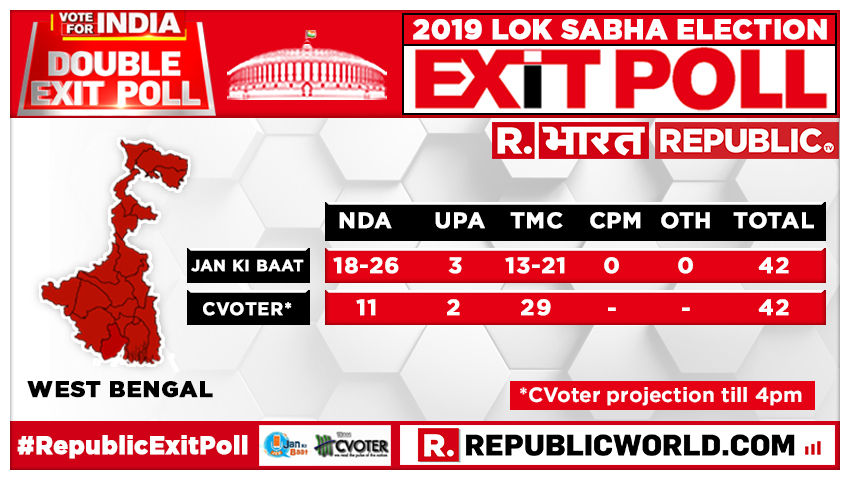 Now, as per the predicted figure, Mamata Banerjee will continue to hold the Trinamool-ruled state by crushing Congress and CPM out of the race by winning 29 seats. However, BJP is projected to win 11 seats in the state to give Trinamool a hard time.

According to Jan Ki Baat, however, the BJP is projected to be in line for an even more significant result by winning between 18-26 seats while the Trinamool is projected to win between 13-21 seats - one of the headlines of the election if it does come to pass.

#RepublicExitPoll | Projections for West Bengal are in, CVoter projects 29 seats for TMC and Jan Ki Baat projects 13-21 for TMC. Tune in to watch it LIVE here - https://t.co/LGCyJUEBn5 pic.twitter.com/aNEMBD46UJ

Violence and the Modi vs Mamata battle - the latter, a crucial factor in determining what BJP’s final tally will be - have, of course, made Bengal an election hotspot. The second largest city and Urban agglomeration in West Bengal after Kolkata, the industrial belt of Asansol is slated to witness a star-powered fight this election. Actor Moon Moon Sen had pulled off a major upset in her poll debut by defeating nine-time MP Basudeb Acharia of the CPI(M) in West Bengal’s Bankura Lok Sabha constituency. In her Poll debut Trinamool Congress nominee Sen triumphed by 97,511 votes over Acharia, who has been winning from the seat without a break since 1980. Sen, daughter of Bengali screen legend Suchitra Sen, received 481,911 votes. Now, the actor-turned-politician has been fielded against BJP's big gun and Union Minister Babul Supriyo from Asansol constituency.

Meanwhile, Sitting MP Abhishek Banerjee, who is the nephew of Trinamoool chief Mamata Banerjee and considered the number two in the party, is seeking re-election from the Diamond Harbour seat, where he is pitted against BJP's Nilanjan Roy. The CPI(M) has nominated Fuad Halim and the Congress Soumya Aich Roy for the seat.

Here's how West Bengal voted in the last three elections in the state: 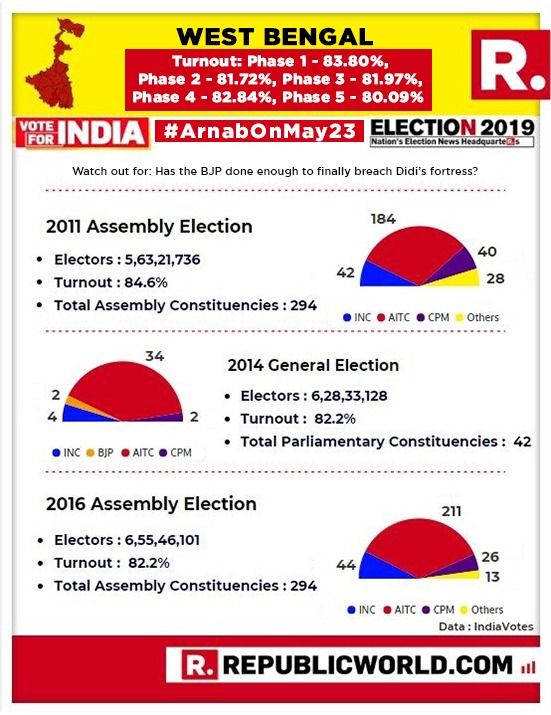