WATCH: Once Arrested For His Cartoons, Here's What Aseem Trivedi Said About The Mamata Banerjee Govt Locking Up BJP Activist Priyanka Sharma For Her Met Gala Meme

Speaking in the matter, Aseem Trivedi, who was arrested on 9 September 2012 on charges of sedition in the light of the content of his work, said that the post shared by Priyanka Sharma was not highly questionable for which she was sent to judicial custody.

"Priyanka Sharma's arrest should be opposed. No matter what her political inclination is, the image that she has posted on not-so questionable, for which she has been arrested. It happens everywhere. People on social media mock their politicians. This can not happen in a strong democracy where a person is getting arrested for memes. If this is happening right now, then it means that the politicians are showing themselves as the 'dictators'," the cartoonist said.

He further spoke about another incident with Trinamool chief Mamata Banerjee, wherein a man was arrested for sharing a picture of pamphlet on his social media.

"And this is not the first incident with Mamata Banerjee. There was a professor of the Jadavpur University who was arrested for circulating a pamphlet. He did not make that pamphlet, only shared an image," he added.

Aseem Trivedi demanded the release of Priyanka Sharma, and said that Mamata Banerjee should be criticised for the act.

"I think Mamata Banerjee should be criticised for this and it is important that Priyanka Sharma should be released. It should also be ensured that such incidents of 'intolerance' never happens again," Trivedi said.

A police complaint was lodged against Bharatiya Janata Youth Morcha (BJYM) worker Priyanka Sharma on May 10 allegedly posting a photo-shopped image of West Bengal Chief Minister Mamata Banerjee on her Facebook handle. She was later arrested by the West Bengal Police and put in 14 days of judicial custody. 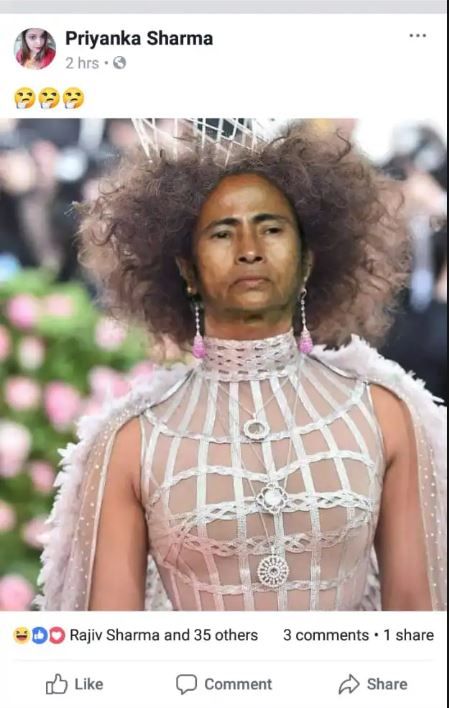 The family of arrested BJP youth wing leader from West Bengal has moved the Supreme Court on Monday to file a bail petition against Mamata Banerjee government. The petition has claimed that her right to free speech has been violated. The court will hear the matter on May 14, 2019.

On September 10, 2012, there was widespread outrage over the arrest of award-winning cartoonist, Aseem Trivedi, on charges of sedition. He was granted bail with a personal bond of Rs. 5000, following which sedition charges were dropped by the government in October 2012.