More than 5 AAP leaders were reportedly spotted conducting the door-to-door campaign in the Mohali town, in violation of the MCC, sources have revealed. 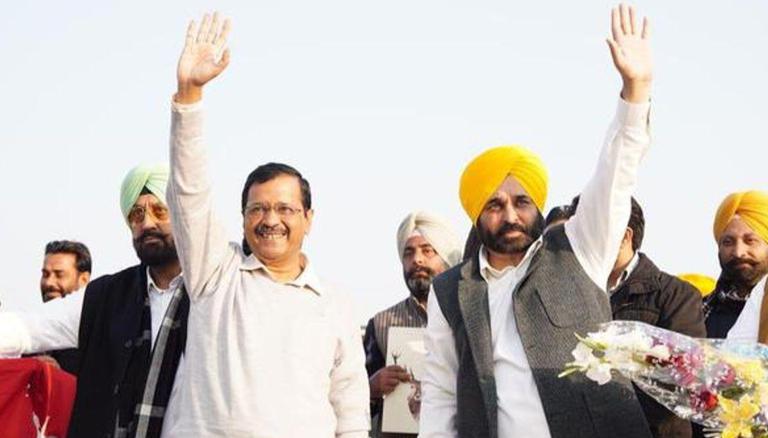 
The Election Commission (EC) on Wednesday issued a notice to Aam Aadmi Party chief Arvind Kejriwal and AAP Punjab president Bhagwant Mann over an alleged violation of the Model Code of Conduct (MCC) in Punjab's Mohali district. According to sources, a complaint was received by Returning Officer (RO) Kharar regarding door-to-door meetings conducted by AAP following which a team of administration and flying squad raided the sites. More than 5 AAP leaders were reportedly spotted conducting the door-to-door campaign in the Mohali town, in violation of the MCC, sources have revealed.

The EC has issued a notice and has sought a reply from Arvind Kejriwal and Bhagwant Mann over the alleged violation. In the notice issued, Returning Officer has directed them to explain their stand on the presence of more than 5 persons during the door-to-door campaign. A reply has been sought in 24 hours.

Kharar Returning Officer (RO)-cum-Sub Divisional Magistrate (SDM) Mr. Abhikesh Gupta said, "A complaint was received regarding the door to door meetings following which a team of administration and flying squad conducted the raids at the sites." He added that the ECI has prohibited any kind of door-to-door campaigning with more than 5 people.

Meanwhile, Arvind Kejriwal has announced that AAP will declare its CM face for the Punjab elections in the coming week. Speaking to the media on his arrival at the Amritsar airport, Kejriwal exuded confidence in the era of Congress and Shiromani Akali Dal coming to an end in Punjab. Earlier, sources informed Republic TV that AAP Punjab president Bhagwant Mann will be the Chief Ministerial candidate. He had lost to SAD supremo Sukhbir Singh Badal in the Jalalabad seat in the 2017 state Assembly election.

In the 2017 elections, Congress won a whopping 77 seats in the 117-member House, whereas SAD could win only 18 seats. On the other hand, AAP emerged as the second-largest party with 20 seats and failed to bear fruit as it could win in only 54 constituencies.

The Punjab Assembly Election 2022 will be held in a single phase on February 14 for 117 constituencies. The counting of votes will take place on March 10, 2022. The last date to file nominations will be January 28 and the nomination withdrawal date has been scheduled for January 31.