PM Modi's Message On Security Lapse To Bhatinda Officials: 'Thank Your CM, Made Out Alive'

PM Modi's convoy was stuck at a flyover near Punjab's Ferozepur for 15-20 minutes on Wednesday afternoon, posing an immense threat to the Head of State. 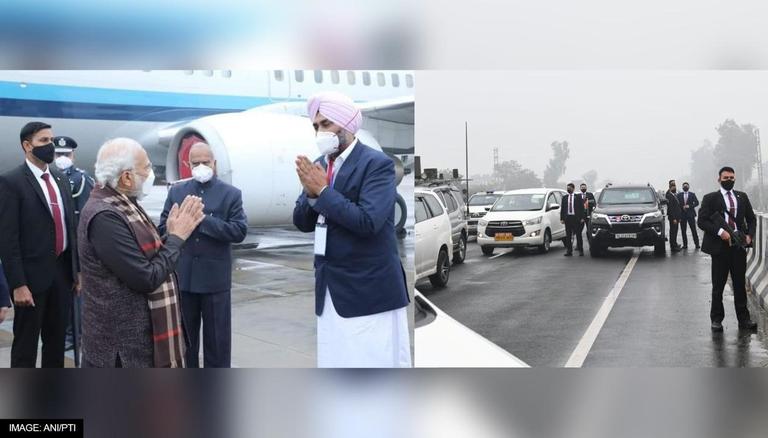 
After the major lapse in his security, Prime Minister Narendra Modi reportedly told Bhatinda officials to 'thank' Punjab Chief Minister Charanjit Singh Channi that he managed to make it back to the airport in one piece. Sources have told ANI that after PM Modi reached the Bhatinda Airport post the shocking disruption of his movement in Punjab's Ferozepur, he told the airport officials in a sarcastic response-- "Apne CM ko thanks kehna, ki mein Bhatinda airport tak zinda laut paaya" (thank your CM, I returned back to the Bhatinda Airport alive).

PM Modi's convoy was stuck at a flyover near Ferozepur for 15-20 minutes on Wednesday afternoon, posing an immense threat to the Head of State. Reports suggest that the procession was blocked by protestors around 30 km away from National Martyrs Memorial in Hussainiwala.

Government sources have told Republic that it was only the Punjab police who knew the precise route of PM Modi's convoy. Given that 'protestors' landed up at the highway, the incident appears to be 'connivance' between the police and those responsible for blocking his convoy, sources have alleged, calling the incident 'the single biggest lapse of security of any Indian Prime Minister in recent years.'

"What is extremely worrisome is that this incident was also a big security lapse as far as the PM is concerned. Protestors were given access to the Prime Minister’s route while the Punjab CS and DGP gave assurances to SPG that the route is clear," BJP National President JP Nadda said in response to the lapse.

The problem started when the PM decided to travel to the National Martyrs Memorial at Hussainwala by road instead of the air route due to poor weather. This was his first visit to Punjab after the repeal of the Farm Laws, and he was set to flag off the campaign for the BJP-Punjab Lok Congress-SAD(Sanyukt) alliance.

At Ferozepur, an announcement was made on the stage that his visit is canceled "due to some reasons". It was then revealed that the PM's convoy was blocked by 'protestors' for 15-20 mins. Moreover, the Punjab Government failed to deploy additional security as a part of the contingency plan. Owing to this, PM Modi was forced to travel back and fly out of the Bhatinda Airport. The MHA has sought a detailed report from the Congress government in Punjab and demanded strict action.