While the Election Commission of India has sounded the bugle for election, it has imposed a ban on rallies & roadshows to avoid crowding in the wake of COVID. 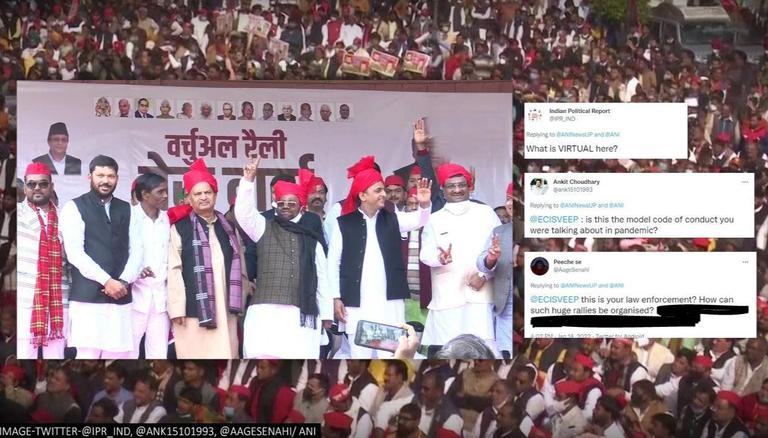 
While the Election Commission of India has sounded the bugle for the upcoming assembly elections, it has imposed a ban on rallies and roadshows to avoid crowding in the wake of rising COVID-19 cases till Jan 15th at the very least. In Uttar Pradesh, all the major parties like the Bharatiya Janata Party and the Congress were seen complying, and switching to the virtual mode for key announcements, until Samajwadi Party on Friday held an in-person mega induction event to welcome rebels like former Uttar Pradesh Ministers Swami Prasad Maurya and Dharam Singh Saini.

In the event that took place in Lucknow where the event banner read 'Virtual Rally', Supremo Akhilesh Yadav before a crowd comprising hundreds made some tall claims like- 'The Samajwadi Party will soon emerge victorious in the UP elections' and that '80 per cent of the people were already in favour of the party, and the remaining 20 per cent will also very soon join'.

Many seeing the images and videos of the event, reminded Yadav and his party that the EC had put a ban on holding such events. Some even questioned the EC. "Ban on public rallies and roadshows has been imposed by ECI till 15th January. How this massive congregation is taking place?" wrote one for SP, while the other pulled up the EC writing, "Is this the Model Code of Conduct?"

READ | Shiv Sena to not ally with SP over 'ideological differences'; Raut to meet Rakesh Tikait

@ECISVEEP what kind of MCC implementation is this ??

Interestingly, the poster on the stage read 'virtual rally'. Some on the internet questioned SP 'how exactly was it virtual?' Also, there were others who cast doubt about Akhilesh Yadav knowing the meaning of 'virtual'. A FIR has now been filed over this matter.

Virtually we live in a simulation 👌 pic.twitter.com/wLuqmziI4L

While the first phase of the Election will be held on February 10, voting for the second, third, fourth and fifth phases will take place on February 10, 14, 20 23, and 27 respectively. The sixth phase will see voting on March 3 while the voting for the seventh phase will be held on March 7. The counting of votes for all the phases will take place on March 10.

WE RECOMMEND
UP elections: NCP's KK Sharma to contest from Anupshahr seat as SP-NCP joint candidate
For UP Elections 2022, phase-wise constituency list out; check full schedule & dates here
Akhilesh Yadav says BJP will win 3-4 seats in UP; welcomes SP Maurya, other leaders to SP
UP elections: Shivpal Yadav's party offered 6 seats in SP alliance; son might contest too
UP elections: Congress and RLD leaders join BSP, will be fielded in Gangoh and Charthawal