Ahead of the polls, the UP Congress in a first of its kind has released a women-centric manifesto for paying special attention to key issues in the state 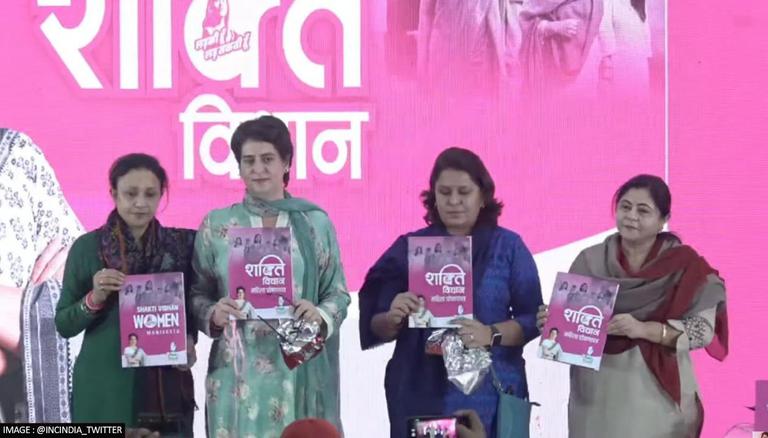 
Congress general secretary Priyanka Gandhi Vadra on Wednesday released a special manifesto for women at the party office in Lucknow. Making several promises for the women in Uttar Pradesh, the party in charge said that the manifesto is a roadmap for the all-round development of women and the state.

While speaking at the event, Priyanka Gandhi outlined several initiatives that will be brought under the 'Women's Manifesto'. She said that Congress will give a 40% quota to women in government jobs if the party comes to power in the upcoming assembly elections in Uttar Pradesh. "We have prepared the women manifesto because we want to empower the women in the state. For this, we will create an environment where several barricades will be broken with their opinion and they will receive full participation in society as well as in politics. This will also end exploitation", Gandhi said.

She further added that the manifesto focuses on six major points for the people of Uttar Pradesh which will include giving women representatives a major position in the Parliament followed by employment to 20 lakh people in the state out of which 8 lakh will be women. Apart from that, working women will be provided safe and advanced hostels across 25 cities followed by open evening schools for girls.

The Congress leader further added that scooters will be provided to graduate girls and smartphones for those who have passed class 12. The Congress government will also give preference to the women under MNERGA, Gandhi added.

Ahead of the upcoming Assembly elections in Uttar Pradesh, the UP Congress in a first of its kind has released a women-centric manifesto for paying special attention to key issues in the state. Earlier on Monday, Priyanka Gandhi after attending meetings of party's committees made the announcement and said that the manifesto will cover various sections including women, youths, traders, farmers, and various deprived sections.

READ | 'Akhilesh Yadav might be an astrologer but I am not': Priyanka Gandhi on '0 seats' claim