Stepping up the fight against BJP ahead of the UP polls, Congress' Priyanka Gandhi Vadra accused the government of hacking her children's Instagram accounts. 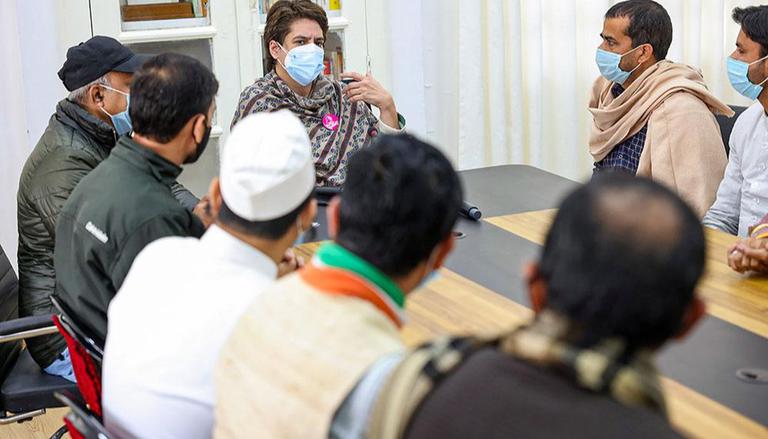 
Stepping up the fight against BJP ahead of the UP polls, Congress general secretary Priyanka Gandhi Vadra accused the government of hacking her children's Instagram accounts. When asked about SP chief Akhilesh Yadav's allegation that his and his party leaders' phones are being tapped by the UP government, Vadra claimed, "Forget phone tapping, they are hacking my children's Instagram accounts. Does the government have no other work"? On this occasion, she also took a dig at PM Modi over his participation in an event at Prayagraj aimed at fostering women's empowerment through self-help groups.

Congress leader Priyanka Gandhi Vadra remarked, "Women of Uttar Pradesh what did I tell you? I urged you to recognize your strength. Today, PM Narendra Modi is bowing before your strength. They have understood that the woman is standing up (for her rights). Why didn't he make these announcements for 5 years? Why is making these announcements before the election? Because women have become aware. We gave the slogan of 'Ladki Hoon Lad Sakti Hoon'. They are demanding their rights. That's why even Narendra Modi had to bow down. I am very happy."

They're even hacking my children's Instagram accounts, let alone phone tapping. Do they not have any other work?: Congress General Secretary Priyanka Gandhi Vadra, in Lucknow, when asked about incidents of phone tapping & ED-IT raids pic.twitter.com/U2CyZjYPWs

Priyanka Gandhi Vadra faces an uphill task of reviving the party in UP, where it won only 7 seats in the 2017 Assembly polls. This time, the party has decided to go solo in the polls. On October 23, she flagged off the 'Pratigya Yatra' in Barabanki. During the course of the Yatra which culminated on November 1, Congress leaders held multiple public meetings to ensure that the people are well acquainted with the promises. On this occasion, she also unveiled Congress' 7 promises for the UP polls, which include the waiver of farm loans and electricity bills, and government jobs to 20 lakh people.

In another major promise, the Congress general secretary revealed that any disease will be treated free of cost if her party wins the Uttar Pradesh Assembly polls. She added that the government shall bear each patient's treatment expenses up to Rs 10 lakh. Some of the party's other promises are the allocation of 40% of election tickets to women, the procurement of wheat and paddy at Rs 2500 per quintal and procurement of sugarcane at Rs 400 per quintal. Congress has also promised three free gas cylinders per year, free travel for women in government buses and an honorarium of Rs 10,000 per month for ASHA, Anganwadi workers.