A huge crowd turned up at the Samajwadi Party's office in Lucknow to attend a 'virtual rally' on Friday addressed by SP chief Akhilesh Yadav and SP Maurya. 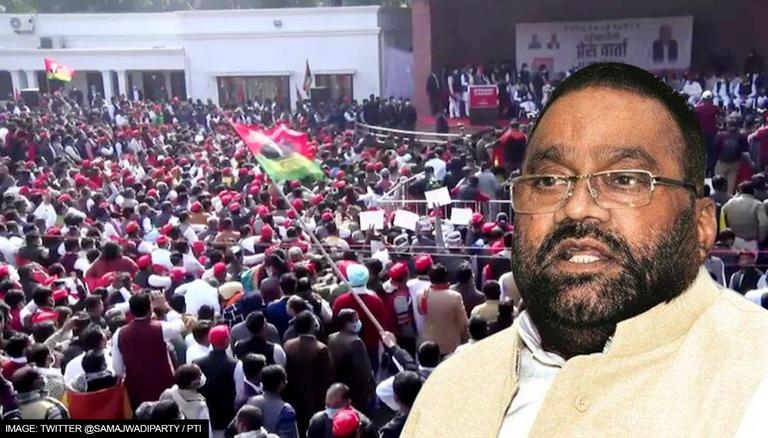 
After a huge crowd turned up at the Samajwadi Party's office in Lucknow to attend a 'virtual rally' on Friday addressed by Samajwadi Party  (SP) chief Akhilesh Yadav and former BJP leader Swami Prasad Maurya, the latter has now denied any violation of COVID norms, stating that no permission was required to have programme inside the party office.

Maurya also targetted the BJP, alleging that they are being targetted by the ruling state government. This reaction comes soon after an FIR was lodged in Lucknow over the event at the SP office, which was held without any permission. The rally was held despite the Election Commission's announcement banning all physical rallies and roadshows until January 15.

The BJP-turned-SP leader Swami Prasad Maurya said, "Every day BJP will see defection. We will sweep BJP one person at a time. We are prepared to dislodge BJP from the govt and make SP govt in upcoming polls. There is no permission required to have programme inside party office. We have followed all the COVID protocols. They are trying to provoke us. The more they get provoked the bigger victory is there for SP."

The violation of the Election Commission's directive issued in light of rising COVID cases in the country happened at the event where former Uttar Pradesh Ministers SP Maurya and Dharam Singh Saini, who quit the BJP this week, joined the Samajwadi Party on Friday, in the presence of the SP chief Akhilesh Yadav.

Apart from Maurya and Saini, several sitting BJP MLAs - Vinay Shakya, Bhagwati Sagar, Roshan Lal Verma, Brajesh Kumar Prajapati and Mukesh Verma - also joined SP.  The mass resignation saga had started with Maurya, a prominent leader from the OBC community. It should be mentioned here that Maurya had defected to the BJP from the Bahujan Samaj Party (BSP).

Earlier, Maurya had said, "Under BJP's rule here, the poor people are not getting the benefit of reservation, all the vacancies are vacant. The state government is giving everything in hands of private firms. The capitalists are getting encouragement. How can the government shy away from its responsibilities?"

The upcoming Uttar Pradesh polls shall be held in 7 phases, February 10, February 14, February 20, February 23, February 27, March 3 and March 7 whereas the counting of votes shall take place on March 10.